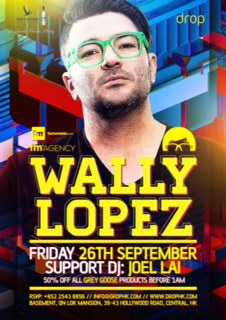 Support DJ : Joel Lai.
Free entry before 12.30am
Half price grey goose products before 1am Door entry (cover charge) after 12.30am will be $200 including a cocktail or standard drink


We are proud to welcome Wally Lopez back to drop for the second time this year! Due to massive popular demand, from those who were lucky enough to catch him last time, and those who unfortunately missed it. We are lucky to be graced with the man’s great presence, outstanding music and amazing showmanship on the decks once again!!!!

In 2000, he launched the label Imprint Weekend Records, and remixed artists like Tiesto, Marco V, Valentino Kanzyani, Dirty Vegas, Bob Sinclar and Robbie Rivera amonst others. Many of their releases were published with great success under major labels such as Defected, Underwater, Yoshitoshi and Subliminal. That year he also produced his first international hit “Amman”, followed by “Patricia Never Leave The House” and “Disco Night”.

In 2001, Lopez created “La Factoria Records” (now “The Factoria), followed by the creation of sublabels “Formula Records, “Fat XL” and “Factomania Digital”. All of these are encompassed with Factomania Group which is headed by Wally. The Factoria currently has more than 30 international high profile releases such as “Love Time”, “Strike Me Down”, “Noche Sin Luna”, “Planet Hearth”, “Burning Inside” and “Close To Me”. As a producer, Wally also recently released on labels like Toolroom, Cr2, Material and Yoshitoshi amongst others.

As a DJ, Wally has played on 5 continents, in the best clubs in the world, and has had residencies at Pacha (Ibiza), The End (London), Discotheque (Barcelona), Red Light (Paris), Pacha (Barcelona), Minsistry of Sound (London) and The Mix (Paris), as well as performing at festivals such as Creamfields Liverpool (X Anniversary), Buenos Aires Creamfields, Global Gathering, Exit Festival, Weekend Dance, Rock in Rio, Monegros Desert Festival and Creamfields Andalucia, and finally his current summer residence at Space Ibiza, Be @ Space Festivals. Wally also became the first Spanish DJ to perform at Madonna’s concert in 2008.

Wally has been in the Top 100 DJ’s in the Top 100 DJ Mag for the past four consecutive years, and has won innumerable accolades and awards, too many to mention!!!!! His massive global following has made him one of the worlds most loved DJ’S, and his visit to drop guarantees to be a night to remember! Don’t miss it!!!!