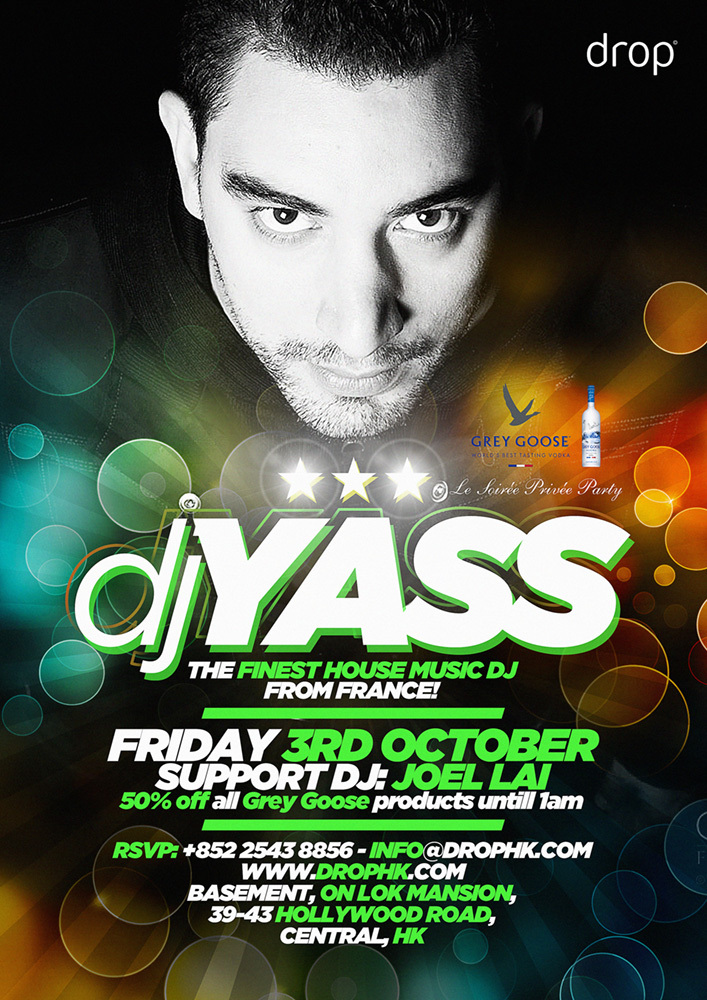 Support DJ : Joel Lai.
50% off all Grey Goose products before 1am.


Drop is proud to welcome back DJ Yass from Defected Records, for the second time this year! With 23 years experience under his belt, DJ Yass has made a name for himself as an international DJ and Producer.
He played his first turntables at the tender age of 13, and at aged 19 was one of the youngest resident DJ’s in Paris, with  residencies at L’Enfer and Queen club.

His mixing experience began with 7 years of Hip Hop. After the electronic wave which swept through Paris, he gradually developed a more techno sound. From 1997, at the end of his sound engineering studies, he developed his style more progressively, House music being his choice of records. He handles this style magnificently, combining his teenage groove with funk, disco, jazz and techno, and refining his three-turntable-mixes! He has played alongside the likes of DJ Sneak, Johnny Corporate, DJ Spen, Little Louie Vega, DJ Deep, Frankie Feliciano, Jazzanova, Kerri Chandler, Roger Sanchez, Dennis Ferrer, Danny Krivit, Martin Solveig and Jamie Lewis to name a few.

His pumping Soulful House has taken him all around the world. He has recently played at Pacha (Ibiza), Ministry of Sound (London), Club Air (Tokyo), Deep LA / Vanguard Club (Hollywood, USA), Southport Weekender (UK) and Mad (Switzerland). Drop looks forwards to welcoming him back to Hong Kong!