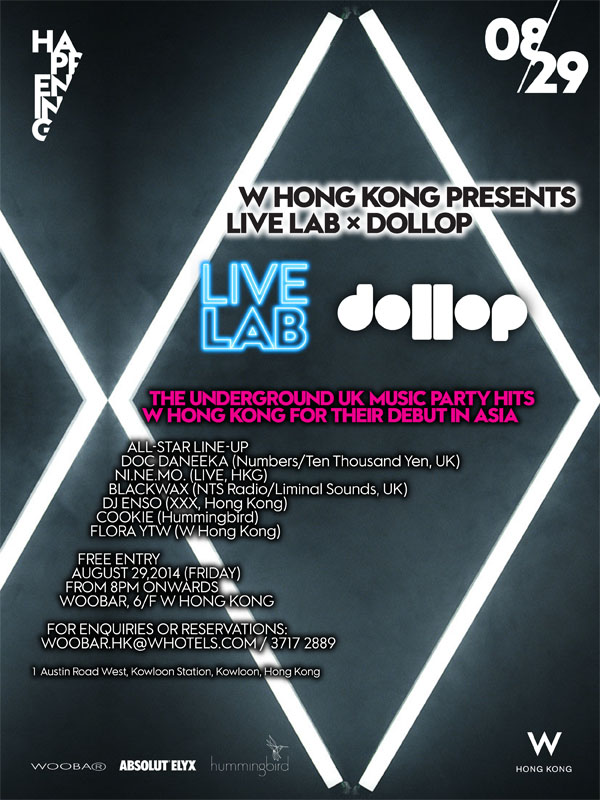 This August, one of London’s biggest underground music promoters dollop will make their debut in Asia as they celebrate their 10th Anniversary.

To headline, we’ll be bringing over producer, DJ & label founder Doc Daneeka on the likes of Numbers, Ten Thousand Yen, 2020 Vision and Ramp, with NTS Radio duo Blackwax (Circadian Rhythms/Liminal Sounds) in support. Whilst on the ground, picked from local Hong Kong talents we’ll have the cult New Wave band, ni.ne.mo playing a live set to kick off the night.

Having grown their forward-thinking music brand over ten years, dollop have booked some of the most exciting live acts from The xx, James Blake, SBTRKT, to the world’s biggest crossover DJs & producers like Disclosure, Breach, Duke Dumont, Diplo, to Lunice, Skream, Jackmaster, Bondax, and DJ Zinc. Having already conquered the festival circuit at Glastonbury (UK), Bestival (UK), Primavera (Barcelona), Notting Hill Carnival (London), Unknown (Croatia) to nights in Ibiza and Berlin, it was only a matter of time that they made their first foray into Asia.

DOC DANEEKA:
Headlining the night will be dollop stalwart Doc Daneeka, the UK-based producer, DJ and founder of the boutique label Ten Thousand Yen who released the likes of House heavyweights Julio Bashmore and xxxy. Besides releasing his own UK Bass and Funky-influenced deep House tracks on iconic labels like Ramp Recordings, 2020 Vision, Modeselektor’s 50 Weapons, and most recently Numbers, he has also worked with Benjamin Damage and vocalist Abigail Wyles on collaborative projects. The Red Bull Music Academy graduate (2011) and ‘Best Breakthrough DJ’ nominee by DJ Mag has remixed the likes of Delphic, Digital Mystikz and Addison Groove, and has been commissioned on mixes for the likes of FACT Magazine, XLR8R. Fresh off his 3-night takeover series at one of London’s coolest new venues with dollop, Doc Daneeka will be making his Hong Kong debut at WOOBAR - expect and set of the finest in infectious new House tracks with a fun, distinct UK Funky and Rave influence.

NI.NE.MO:
New Wave-influenced electro indie band ni.ne.mo. deservedly have a cult following in Hong Kong's underground music scene. Founded in 2009, the four-piece's catchy songs were collated in their debut album 'After Party' - which move from electronic influences to New Wave and indie pop. Previously gracing events for the likes of Converse, Hidden Agenda, and Clockenflap Festival, they will be making their highly-anticipated debut at W Hong Kong, taking over our Live Lab session for the night.

BLACKWAX:
One half of the UK production and DJ duo Blackwax, Luke Dubuis will be heading over to join our line-up for a special House set, expertly blending his influences from Grime, UK Funky, and Techno for a dancefloor-orientated show. Besides having released their own tracks on underground labels like Liminal Sounds, they also run one of the most popular shows, ‘Circadian Rhythms’ on London's prestigious music radio station, NTS Radio with producer/DJ Last Japan. Recently playing Paris for Teki Latex’s livestream show Overdrive Infinity, Dubuis will be one to watch for his first set in Asia before he tours Shanghai, Beijing, and Taipei.