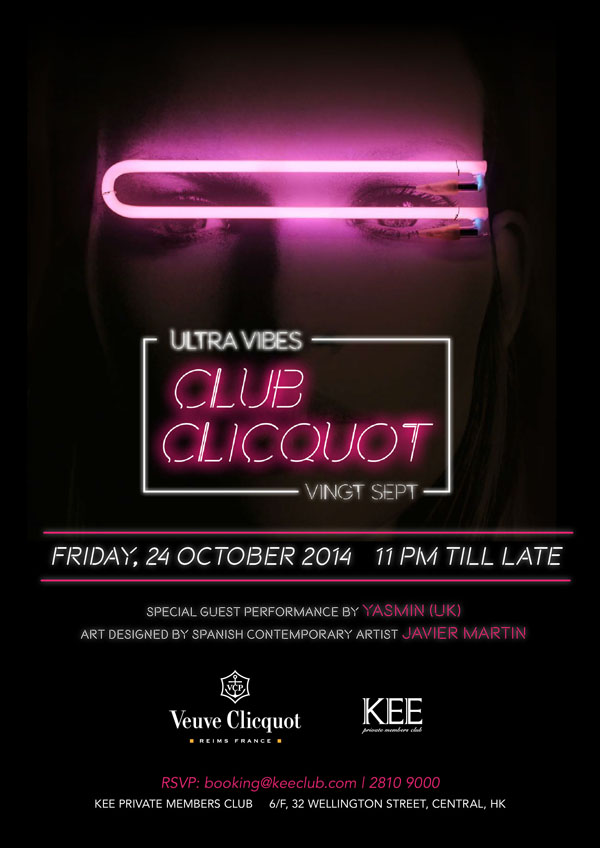 Expect cool Clicquot champagne rituals, glowing pieces by Spanish visual artist Javier Martin and an amazing set byYasmin who will keep you on the dance floor with music to move both body and soul.

YASMIN (UK) - www.yasmin-music.com
Discovered by Pharrell Williams, Manchester-born singer/songwriter and Yasmin developed a huge passion for R&B when she lived in Scotland. She later moved back to London, where she ran her own club night Bad Intentions and began opening shows for the likes of N.E.R.D, Eve and Taio.  After performing with Dizzee Rascal at Ibiza Rocks, she supported Example on his U.K. tour and provided guest vocals for Devlin’s hit "Runaway." In 2010 she signed a deal with Ministry of Sound Recordings imprint Levels Entertainment and worked on material with Labrinth, Shy FX and Future Cut...


JAVIER MARTIN - http://www.javiermartinart.com/
Spanish Contemporary Artist Javier Martin has created a very characteristic way of work combining paintings and photographs, and a particular language using fashionable trends as added elements to his art. Self –taught since he was 7, he won the Caja Madrid contest for young artists in 1994. His technique is refined and versatile, from sculptures made of recyclable materials to his Louis Vuitton rifles collection made of handbag fabrics and clasps. Some of his most memorables art exhibions are, Estampa Madrid, Arte Lisboa, Art Lima (Peru), Art Basel Miami Beach, Art meets Fashion New York  and Artshow Busan (Korea).