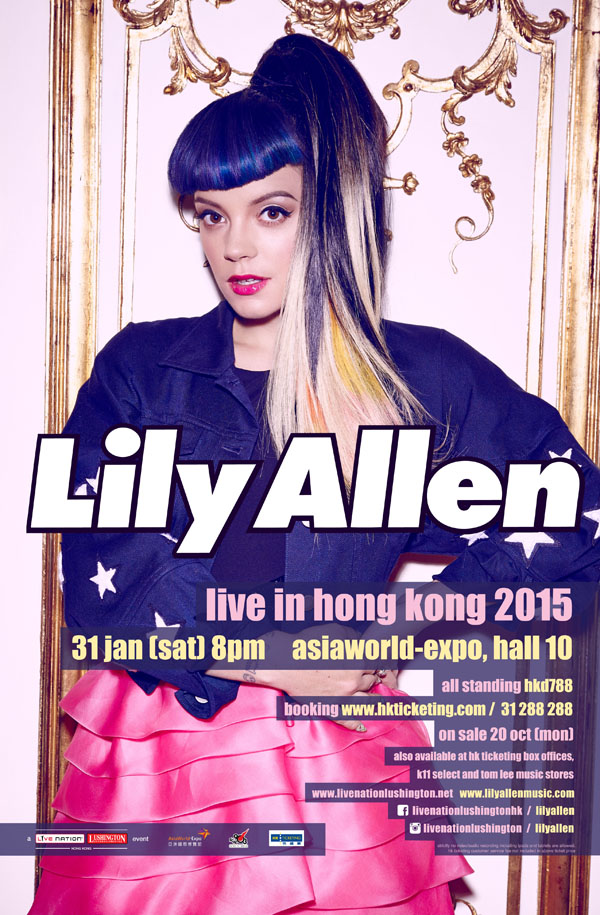 Live Nation Lushington is proud to announce Lily Allen will be performing in Hong Kong for the very first time next year. The British pop sensation will bring her showmanship and impressive live show to AsiaWorld-Expo, Hall 10 on Saturday, 31 January 2015.
Tickets to this hottest show in 2015 will be available from HK Ticketing on 20 October 2014 (Monday) 10am onwards. Ticket price is HKD788 (All Standing).
Since emerging in 2006 with her iconic debut single "Smile," Lily Allen has gone on to sell over five million albums worldwide. Her huge success in the U.K. not only quickly spread around the world but also helped shift the musical axis toward young female artists. Her talent as a songwriter was acknowledged in 2010 when she won three Ivor Novello Awards. That same year she announced she was taking a break from making and performing music. In 2013 she returned to the studio, having spent the previous three years raising her young family and establishing her own record label. At the end of 2013, she released two songs simultaneously — her cover of Keane’s “Somewhere Only We Know,” which reached No. 1 in the U.K. and the download-only track “Hard Out Here,” which charted in the British Top 10 that same week. She has been making waves with “Hard Out Here,” which Entertainment Weekly called “a booming critique of pop’s double standard” and “a lot of fun.”
Lily Allen’s third studio album, Sheezus, was out in May 2014. It is the British pop singer’s first album since 2009’s acclaimed It’s Not Me, It’s You. Sheezus finds her re-teaming with her long-time collaborator Greg Kurstin (Tegan & Sara, P!nk), except for on the title track, which was produced by DJ Dahi, and “Air Balloon,” which was produced by Shellback. The album debuted at the top of the UK Albums chart, making it her second consecutive #1 album.

Critics have already weighed in on Lily Allen’s return with Cosmopolitan announcing that “Britain’s top pop provocateur is back and as unapologetic as ever.” U.K. music bible Q declares her “Britain’s smartest pop star” and notes that Sheezus is a blend of “punchy feminist statements, wistful party jams, NSFW love letters to her husband, two-finger salutes to her critics, and moments of startling vulnerability.” In its four-star review, The Times calls it “The Mother of all Comebacks.” Elle.com calls her “the pop world's Greek chorus, an important voice reporting from the front lines.” New York magazine says: “It’s Lily Allen, so we are ALWAYS paying attention.”

This year, Lily Allen made her triumphant return to the Glastonbury Festival in June. This was her first Glastonbury appearance since 2009 and BBC applauded her saying “she is back to her best, never afraid to raise her voice with refreshing honestly and butt-kicking authority.” She also played V Festival in August, “she undeniably knows how to work a crowd,” according to The Telegraph.
It has been a busy year for the singer, who has been touring extensively, putting on amazing live performances for her fans. Come January 2015, the Hong Kong audience will get their long-awaited chance to take part in this unique world of Lily Allen’s music for the first time!