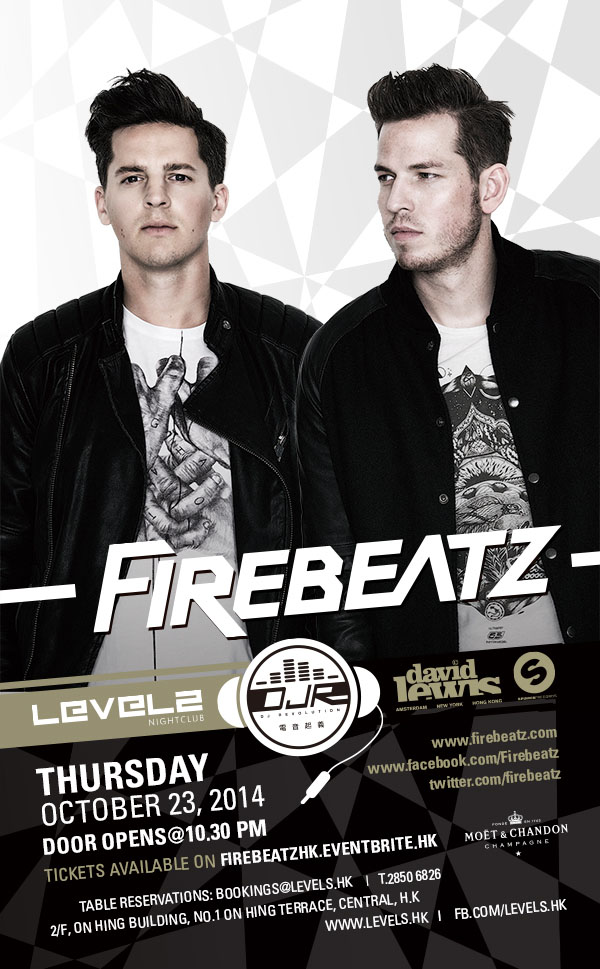 Since storming onto the Dutch music scene in early 2008, Holland based duo Firebeatz have swiftly merited a reputable and solid name for themselves from the start!

Youngsters Tim and Jurre met each other at the School of Arts in Tilburg, the Netherlands, where they discovered their musical chemistry and decided to join forces!

In the summer of 2008 they released their first productions including the track “Speak up” and shortly after, the follow up “We’re Going Back”.
Both tracks received lots of airplay on several Dutch radio stations like Radio 538 and SLAM!FM.
With their distinctly unique sound which boasts infectious bass hooks, insanely catchy vocals, compulsive beats, groove and drive, this house-duo quickly caught the ears of certain famous DJs such as Fedde Le Grand, Roger Sanchez and Funkerman.

Quickly after this, they got booking requests for great festival gigs in the summer of 2009. With performances at Rockit Festival, Free Your Mind Festival, Zomerkriebels Festival and some nice residences they quickly made a name for themselves in the Dutch club scene.
In 2010 Dutch label Flamingo Recordings, which needs no introduction, picked up this young duo and signed tracks of the boys on Flamingo and sister label Blackbird.

Shortly after, Firebeatz collaborated with JoeySuki and the track “Hidden Sound” was born.
This track received massive support from the likes of Swedish House Mafia, David Guetta, Dirty South, Laidback Luke, Chocolate Puma and Chris Lake, which resulted in a climax when “Hidden sound” reached #7 at Beatport.

Looking ahead, Firebeatz will continue to conquer the dance music world, with new upcoming original productions on SIZE, Defected, CR2 and Nervous. Collaborations with Chocolate Puma and Funkerman, kick ass DJ performances and remixes for exciting names like Flo Rida, Timbaland ft. Missy Elliot, Snoop Dogg, Firebeatz have proven they are on a run to the top!


Ticket Reservations: firebeatzhk.eventbrite.hk
* for e-ticket holders, please bring along your printed ticket to the event