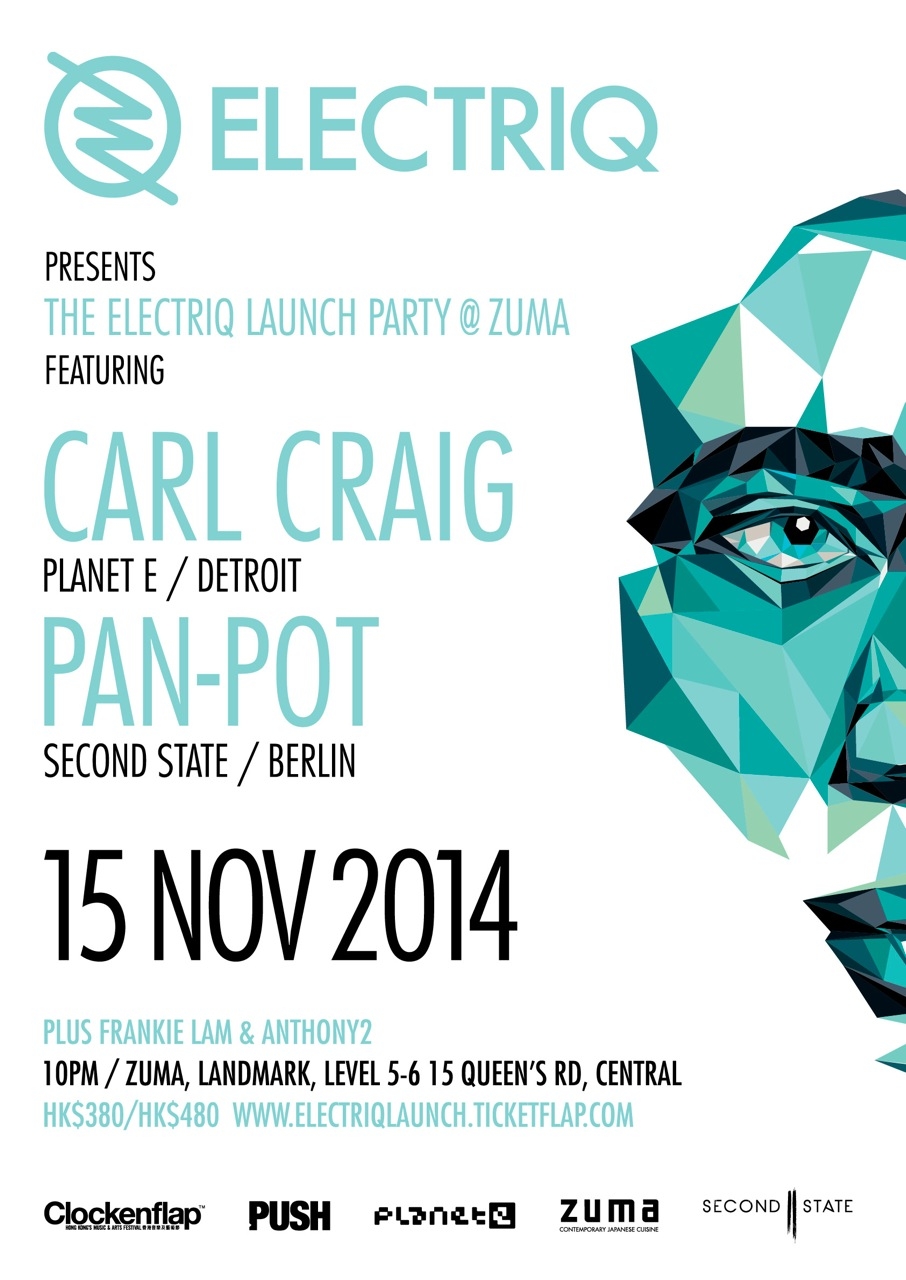 After the postponement of our planned launch in October, the new electronic music series ELECTRIQ is ready to lift-off this November with an event co-headlined by two giants of the global techno scene.

At Zuma on November 15, Electriq – made up of the people behind Clockenflap, Hong Kong’s biggest annual music festival, and PUSH, the city’s leading dance music promoters – are proud to be presenting Detroit techno icon CARL CRAIG and Berlin techno duo PAN-POT.

Carl Craig has long been one of the most influential figures working in electronic dance music, and is one of the best-known DJs and producers to have emerged from the fertile Detroit techno scene.

The man is a creative visionary, a groundbreaking electronic music icon, a Grammy-nominated composer, a world-class DJ and an ambassador for his native Detroit. Yet the common thread that runs through Craig’s broad musical canon and creative projects is a resounding fascination with futurism.

Under his own name and aliases such as Innerzone Orchestra, Craig has been releasing original music since 1989; in 1991 he launched the Planet E label that has released tracks by techno luminaries such as Moodyman, Kevin Saunderson and Kenny Larkin; and he has provided his remix skills for the likes of LCD Soundsystem, Hot Chip, Theo Parrish and UNKLE. Craig helped launch the Detroit Electronic Music Festival in 2000 and remains a strong force at the festival today – as well as throughout the global techno movement.

Pan-Pot are a much younger act, but have exploded in fame and popularity in the past few years. Since coming together in 2005, the Berlin duo have gone from playing small clubs in their home city to some of the biggest nightclubs and electronic music festivals throughout the world, spreading their infectious enthusiasm and love for upbeat electronic dance music.

The duo of Tassilo Ippenberger and Thomas Benedix rose to fame as part of Anja Schneider’s Mobilee Records stable, which released their massive tracks such as Captain My Captain and Confronted, and through remixes for the likes of Booka Shade and Marc Romboy. Whether it’s an intimate club night or a massive festival like Awakenings, Timewarp or Creamfields, Pan-Pot know exactly what to do. Unconstrained by boundaries, they traverse techno, house and everything in between with a masters' touch.

Plus Frankie Lam and Anthony2