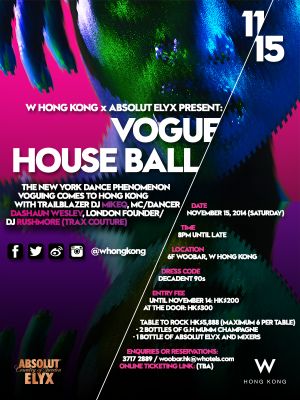 On November 15, we will be transforming WOOBAR into a decadent NYC ballroom for a hedonistic, all-immersive themed party, headlined by the infamous leaders MikeQ, Dashaun Wesley, and DJ Rushmore of the musical movement of ‘Voguing’ today.

The artistic dance Voguing has swept the underground clubs of New York since the 80s, and undergoing a recent revival, remains one of the most influential subcultures today. In elaborate ‘ball’ competitions, dancers battle each other aka ‘walk’ on the dancefloor for the glory of their ‘house’, in the spirit of a model on the catwalk. Popularised by Malcolm McLaren and Madonna’s Vogue, ballroom culture became world-famous for its glamorous and distinctive look, and has made its way to fashion with luxury houses such as Versace and Moschino.

For the first time in Hong Kong, we will stage the epic ballroom, bringing over the modern day pioneers leading the return of the scene: New York producers, DJs & MC personalities - MikeQ of the cult Qween Beat label, Diplo’s Mad Decent and L.A.'s Fade To Mind, award-winning world-famous Voguer Dashaun Wesley of the House of Evisu, and Rushmore, the DJ and co-founder of East London club brand House of Trax/Trax Couture, one of the first parties in the UK championing the unique sound.

One of the most in-demand DJs on the underground music scene, New York/New Jersey’s MikeQ has been spreading the sound of ballroom house, teaming up with the label of the moment, Fade To Mind (sister label to the iconic UK bass label Night Slugs) as well as launching his own Qween Beat collective and label.

The inimitable Dashaun Wesley made his name across the highly competitive dance battles with his unique style and swagger from his collective House of Evisu. Having taught several Voguing classes worldwide, he has also acted as MikeQ’s MC and dancer on tour. Watch him in action here and as featured by the luxury fashion magazine Nowness (video and interview here). Alongside his talent we’ll be inviting Hong Kong’s finest local dancers for a one-of-a-kind battle on stage.
Co-founder of the east London-based record & fashion label Trax Couture (born from the cult club night House of Trax), Rushmore’s DJ sets are ones to be reckoned with. As one of the tastemakers in London to bring over the American sound to the UK, they invited footwork and juke icons like Chicago’s DJ Earl, Tyree, DJ Assault, to New York It-Girl Venus X (whose parties saw guests like Rihanna and M.I.A. and worked with Opening Ceremony) to DJ in secret underground locations for iconic parties.
In true W style and part of W Hong Kong's new White Label event series showcasing the best in emerging talents, the Vogue House Ball sponsored by Absolut Elyx will be a decadent, glamorous party fusing music and fashion. With the DJs and MCs playing fun vocal Jersey Club style R'n'B edits, Future Grime, Booty & Juke House to Chicago Footwork, a league of Voguers will ‘walk’ down our red carpet dancefloor with guests in an opulent 90s dress code to join in.

Ladies and gentlemen, get ready to walk!

Terms & Conditions
1. Only tickets issued by Fatsoma will be accepted for entry to the event. Pay Pal receipts will not be accepted and is not considered a ticket for entry.
2. All bookings are required 11% online transaction fee.
Table Bookings
Table to Rock HK$5,888 (Maximum 6 per table)
- 2 bottles of G.H Mumm Champagne
- 1 bottle of Absolut Elyx and mixers