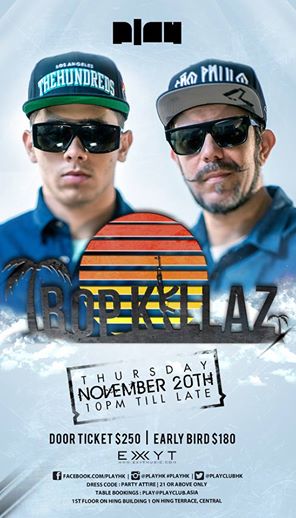 PLAY is bringing a night for all those trap, twerk, big bass lovers in Hong Kong. A full evening filled with pure trap music. Ladies, we hope your ready to get low and dance all night.

Tropkillaz are the duo formed by Brazil’s top producers from the old and new school: DJ Zegon and Laudz. They shall be performing Thursday, November 20th 2014.

DJ Zegon is one of Brazil’s most respected producers and DJs of all time. Former member of N.A.S.A., DJ Zegon’s career spans over 20 years with credits on over 100 records with artists such as Kanye West, M.I.A., David Byrne (Talking Heads), George Clinton, and a few Wu Tang Members (RZA, Method Man, Ol’Dirty Bastard) among others.

Laudz is a new cat in the game, but with only 5 years producing, he’s already worked with rap stars like Snoop Dogg, Dr Dre, as well as the main MCs of Brazil’s new hip hop scene, and has done scores for movies and video-games.

The result of this junction is an intense collection of club bangers that blend many styles from trap and bass music with electro, hip hop, and latin, creating a unique tropical bass sound & style. The workaholic duo have been busy releasing tune after tune weekly in their Soundcloud, reaching millions of plays worldwide.

In just a few months of being established, Tropkillaz received worldwide attention with their hit “Mambo”, a sure shot on any dance floor. Their recent collaboration “Assets”, with Yellow Claw, released by Mad Decent, was a huge step up for their career, and established Tropkillaz on highlights of the Trap Scene, while also scoring 6# on the Top 10 Trap Duos on the Run The Trap (a Complex Magazine blog).

In December 2013, the Tropkillaz remix to N.A.S.A’s “Hide” hit #1 on the iTunes Electronic Music Charts in the USA, and peaked at #8 in the UK – further showing that Tropkillaz are heavyweight contenders, charting amongst artists like Disclosure, Major Lazer, M.I.A, amongst others.
Supported by superstars DJs like Diplo, Major Lazer, Flosstradamus, DJ Snake, Steve Aoki, Z-Trip, Gladiators, Bro Safari, and with over 50 original tracks and remixes, and with tours hitting major USA & European clubs and festivals – ranging from Shambhala in Canada to Paris Social Club, to Privilege Ibiza, events for RedBull, amongst others, Tropkillaz are ready to take their heat worldwide.

Early Bird: $180
Door Tickets: $250
*All tickets include one standard drink

Complimentary drinks for ladies till midnight!