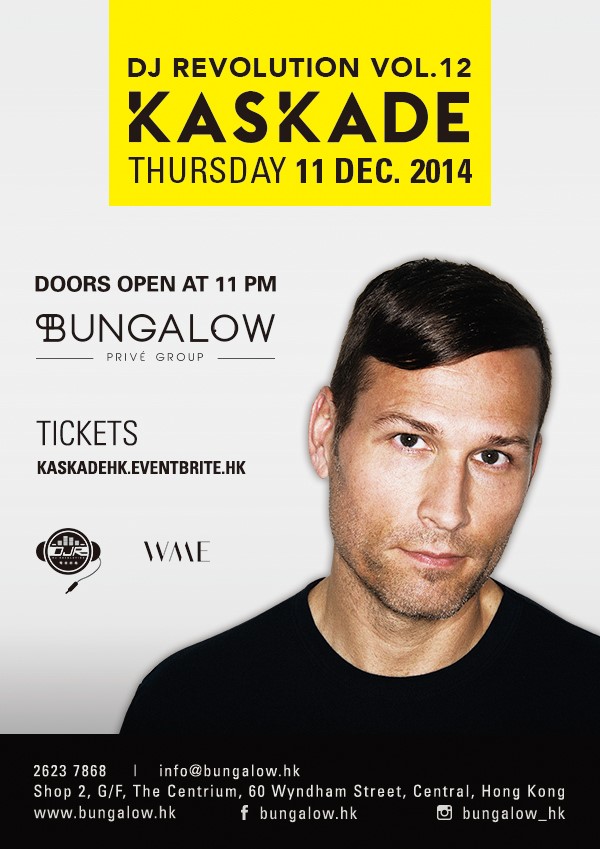 Grammy nominated DJ Kaskade will be returning to Hong Kong on Thursday, December 11th, 2014 at 11:00PM to play an exclusive set and performance at BUNGALOW.

The New York Times may have called him the “new face of electronic dance music” in a recent profile, but Ryan Raddon, known as Kaskade, has been in the trenches of the EDM scene as an original recording artist and in-demand DJ for more than a decade. He has released seven studio albums, including his latest, Fire & Ice, scored nine Top 10 hits on Billboard’s Hot Dance Airplay Chart, created chart-topping remixes for everyone from Lady Gaga to Beyoncé, appeared at all the major summer festivals, and has performed between 150 and 200 headlining shows a year for the last 10 years, building a name for himself as an innovator of the EDM scene as we know it today, which has opened doors for the likes of Deadmau5, Tiesto, Skrillex and more. In doing so, he has helped to lay the groundwork for a titanic musical and cultural shift: a post-rock EDM revolution that has captured the imagination of a new generation of music lovers across North America. Kaskade’s belief in the transformative power of dance music to uplift thousands of people at once has had a significant effect on the U.S. scene. His ground-breaking double residency in Las Vegas at the Encore Beach Club (which had not even been built when he signed on) and Marquee has elevated the city’s status as a premiere club-going destination on par with London, Berlin, and Ibiza, is another testament to his influence.

Bungalow is Privé Group’s flagship restaurant and nightclub, and is situated in the exact same spot where it all began – the legendary 60 Wyndham Street. With an area of 6,000 square feet, Bungalow provides customers a club experience unlike any other. The venue is fitted with the latest in entertainment production such as Funktion-One speakers, moving head spot lights, lasers and 4 wall-sized LED screens. The elevated DJ booth is equipped with three Pioneer CDJ2000 Nexus decks and a DJM900 Nexus mixer, in which is surrounded by a full service semi-circle marble bar. J. Candice Interior Architects is the vision behind the blue and white renaissance-esque design of the space, which features 14 VIP tables and 4 by-invitation only tables next to the DJ booth.