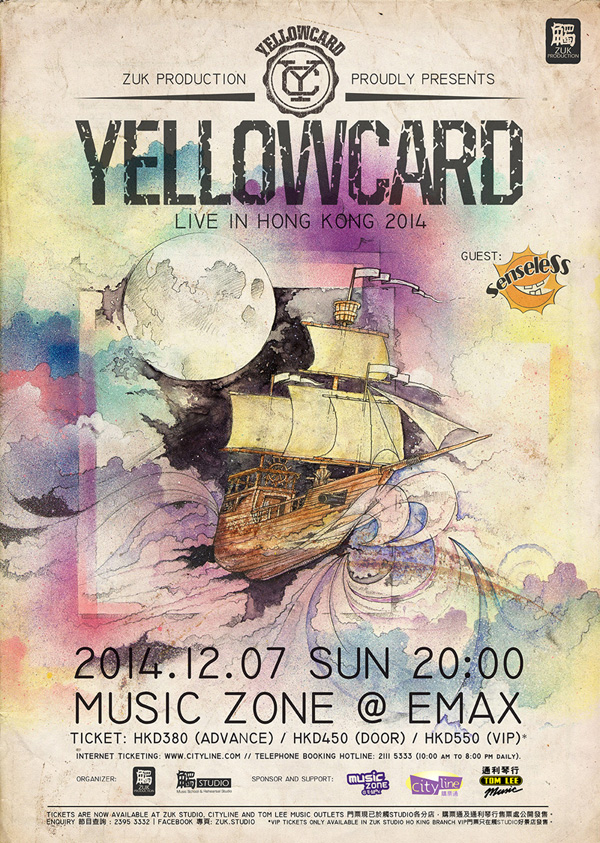 YELLOWCARD is hitting Hong Kong on Sunday, 7 December 2014 at the Music Zone, KITEC

Just released their seventh studio album "Lift a Sail”, the Pop punk legend from Los Angeles YELLOWCARD, is going to sail to Asia this December, and will rock HongKong on 7th December before heading to Beijing, Shanghai, Singapore, Philippine, Japan and Taiwan!

The 4-piece pop rock band added a violin on top of traditional pop punk melodic vocal line, creating their own characteristics and wrote famous tune like  "Ocean Avenue", "Lights and Sounds", and "Light Up the Sky"
etc

Their newest album featuring their theme track "Lift a Sail",  is actually a story between frontman Ryan Key and his wife. In 2012, while on tour in Europe, Key met the woman who would become his wife, Alyona Alekhina, a professional snowboarder from Russia. By the end of the year they were engaged— but just a few months later, while training in California, Alekhina suffered a spinal cord injury, causing paralysis below the waist.In the end, the tragic turn of events brought Key and Alekhina even closer together. Key was at her side for months in intensive care and through the beginnings of physical therapy. They were married in the ICU. “It's been an unimaginable challenge for us both,” Key admits, but his wife’s will and determination through it all has been an inspiration.  Key’s whirlwind journey with Alekhina inevitably influenced the lyrics on Lift a Sail.

Their new songs together with their live performance will be something that you will never want to miss, don't hesitate and get your ticket now at www.cityline.com or call 2111 5333!