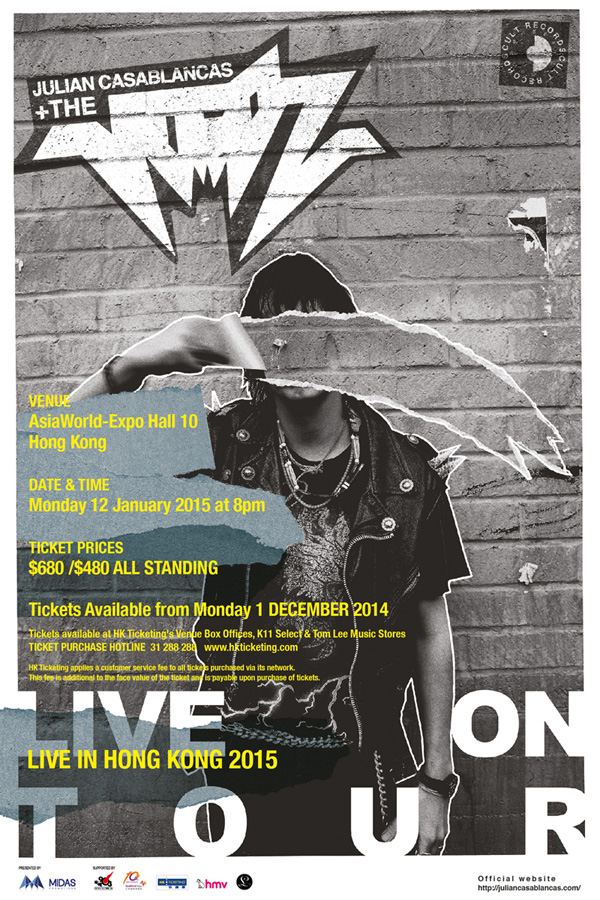 New York native Julian Casablancas, singer, songwriter and front man of The Strokes is about to rock Hong Kong with his new band The Voidz as part of their world tour in celebration of debut album Tyranny. The band’s first-ever live performance in Hong Kong – Julian Casablancas+The Voidz Live in Hong Kong 2015 is taking the stage at AsiaWorld-Expo on 12 January 2015.

Julian Casablancas+The Voidz is very much a collaboration founded on old friendships and musical kinship. The band has come together over the past four years via different music connections and friends in New York City and Los Angeles with Casablancas on lead vocals and at the helm of the band, Jeramy Gritter on guitar, Amir Yaghmai also on guitar, Alex Carapetis on drums, Jeff Kite on keyboard and Jake Berkovici on bass. It is their love of beat driven, aggressive and avant-garde music that has bonded them and powered them through more than two years of writing and producing their first album Tyranny.

Punk rockers at heart, Julian Casablancas+The Voidz is also adept at various music styles. Their versatility is seen through their debut album Tyranny, released in September 2014 to critical acclaim. Full of progressive experimental sounds and catchy hooks, Tyranny is a mesh of hardcore punk, new wave, metal and more. Musically ambitious and politically charged, the album is an amazing departure from Casablancas’ earlier solo venture Phrazes for the Young or The Strokes’ sharp tunes.

Available from 1 December 2014 at HK Ticketing’s Venue Box Offices, K11 Select and Tom Lee Music Stores
Ticketing hotline: 31 288 288
On-line ticketing: www.hkticketing.com
HK Ticketing applies a customer service fee to all tickets purchased via its network. This fee is additional to the face value of the ticket and is payable upon purchase of tickets.