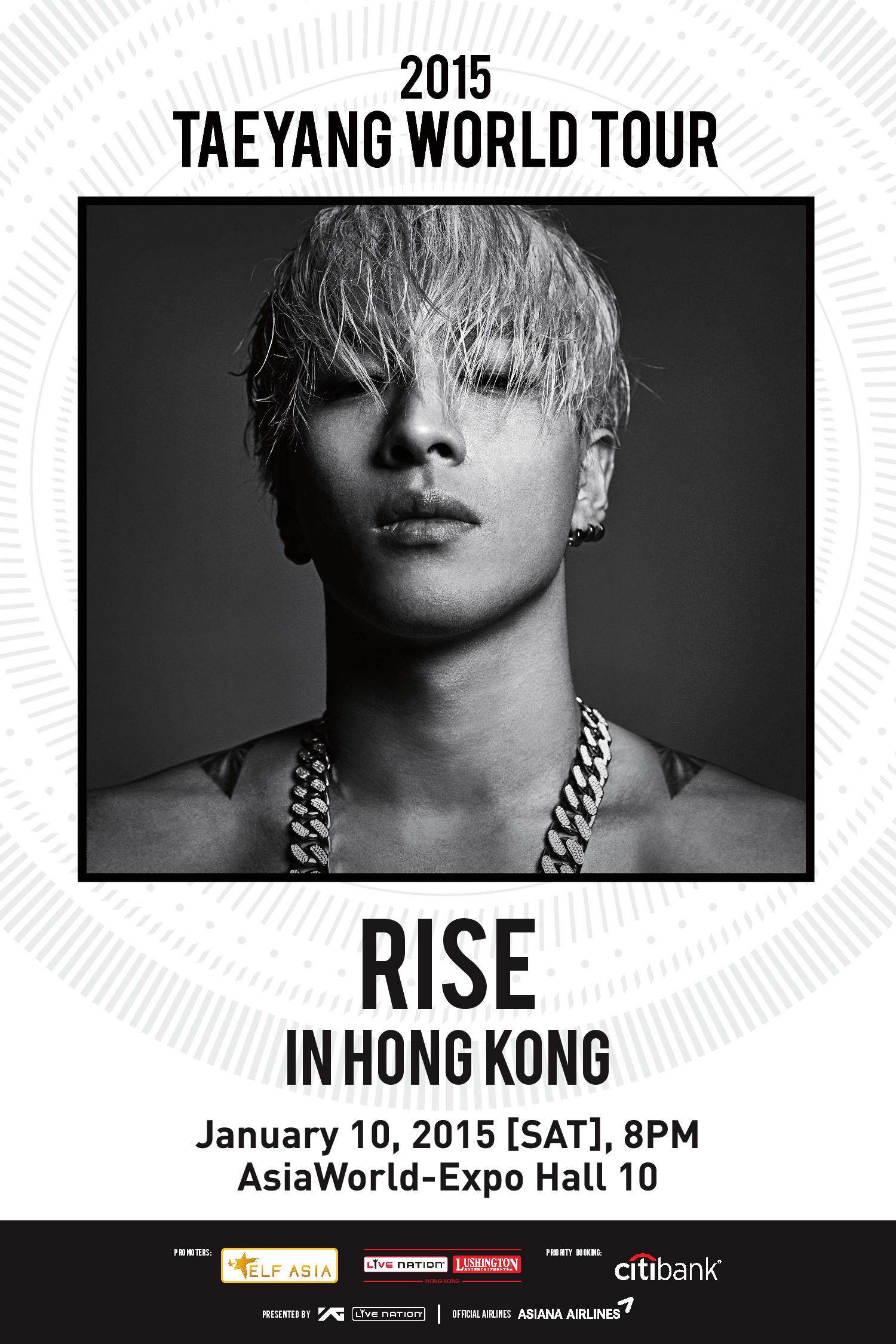 Taeyang, the lead singer of BIGBANG and widely praised as the “Korean Prince of R&B” renowned for his soulful voice as well as his outstanding dancing skills, will kick off his first ever solo world tour “2015 TAEYANG WORLD TOUR [RISE] IN HONG KONG” on January 10, 2015 (Saturday) at AsiaWorld-Expo Hall 10.

Taeyang has been going on tours after his much anticipated 2nd solo album “Rise” was released in June. The tickets of the first two shows of his first solo concert in Seoul were sold out in 10 minutes and one
show has to be added to cope with the massive tickets demand. Before his successful shows in Seoul, a total of 13 impressive shows were held in Japan, with cities including Osaka, Yokohama, Fukuoka, Hyogo, Shizuoka and Tokyo, which also showed his outstanding ticket power as a solo artists. The hype will go on as Taeyang will be holding his first ever solo world tour and Hong Kong will be the first stop with “2015 TAEYANG WORLD TOUR [RISE] in HONG KONG ”, which is one of the most anticipated concerts in town in 2015.

Taeyang was the first member of BIGBANG to step out from the group as a solo artist and has gained huge popularity across Asia. He is widely praised as the “Korean Prince of R&B” since his debut. He has demonstrated his talents and proved himself as an outstanding artist locally and internationally. He released his first solo album “Solar” in 2010 which became an instant hit. The album not only swept numerous local Korea music charts, it also climbed to reach the US Top 10 iTunes Album Chart, and made him the first Asian artist to have topped the Canadian and US iTunes R&B/Soul album charts. He continued his success with his second album “Rise”, released earlier in June 2014, which became the
highest charting K-Pop solo album in Billboard, the 3rd best charting Korean album in US Billboard 200 history and also the highest charting ever for a solo act. The title track “Eyes, Nose, Lips” also had an unprecedented 5 week run at #1 on numerous Korea’s real-time music charts.

Besides his outstanding music achievements, Taeyang has also been recognized as the leading style icon with his unique fashion sense. Leading international brands such as Calvin Klein, Givenchy, Thom Browne, Balmain, Rick Owens, Chrome Hearts, LV, etc, have invited Taeyang to their shows and wear their latest collections. He is also the only K-Pop artist to be selected in the CK ONE’s 20th anniversary global campaign along world-class artists, including Mark Wahlberg, Kate Moss, Sky Ferreira and Rita Ora.

Representatives from the concert organizers, including ELF ASIA and Live Nation Lushington (Hong Kong) commented, “Taeyang is definitely one of the most talented artists in the world and we are proud that Taeyang has chosen Hong Kong to kick off his first world tour. It is our pleasure to work with him and bring his amazing performance to all the music lovers and supportive fans of his in Hong Kong. Taeyang will definitely showcased his unrivaled charms and talents and deliver the most spectacular concert for all Hong Kong audience in his first ever solo Hong Kong concert!”

Citibank is the exclusive priority booking service provider of the event.