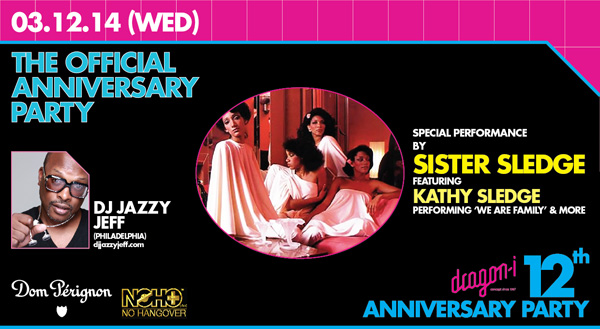 The official anniversary party will be held on December 3rd , from 10:30pm till late. The soul and disco legend, superstar Sister Sledge will fly down to Hong Kong to perform along with the American hip-hop and R&B DJ Jazzy Jeff!

Be ready to party with Sister Sledge‘s special live performance with their hittest single that rocketed the group to fame- “We are family” and many more timeless, classic disco anthems!

About Sister Sledge
Sister Sledge was one of the most successful female groups of the 70s and 80s. Born, raised and influenced by the Philadelphia sound, Sister Sledge was formed in 1972 and achieved superstar status by Nike Rodgers and Bernard Edwards of the disco group, Chic.