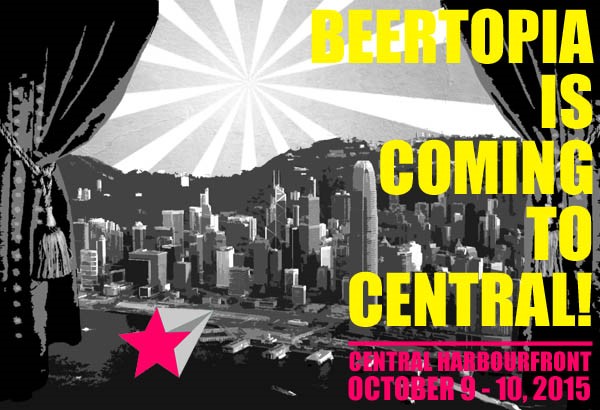 Hong Kong’s largest craft beer festival returns to Hong Kong Island, where it will make it’s new home at the Central Harbourfront. Taking place October 9-10, 2015, this will be the fourth year of annual beer celebration, which drew over 11,000 attendees last year.

This year’s event will feature over 500 different beers from around the world and guest breweries from overseas. The beers will range from across 23 different countries, with 33 beers brewed locally right in Hong Kong. IPA lovers will have over 80 choices, while fans of darker beers can choose from over 40 different porters and stouts. There will also be over 60 different cider options for those who prefer something a little lighter or fruitier.

Food vendors will serve up everything from BBQ to burgers, while entertainment will include live bands and DJs, an Instagram photo booth, as well as the NOHO Beer Games Area featuring games like giant beer pong and flip cup. New this year is the family-friendly Wild West Market, created in partnership with the HK Markets Organization, which will also be open to the public.

In addition to the festival itself, Beertopia is also launching and leading the efforts behind HK Beer Week, a weeklong, citywide celebration of craft beer involving events and promotions at bars and restaurants across the city. It will take place October 2-10, in the week leading up to and culminating in Beertopia. Details for the specific events will be confirmed and released closer in mid-September on the HK Beer Week website: http://www.beerweek.hk

Early bird tickets for Beertopia will go on sale in mid-August, available via the HK Beer Week website, with ticket prices starting from HKD $280.