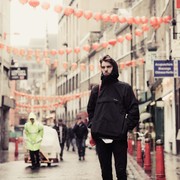 Griffin James, aka Francis Inferno Orchestra is the conductor of a new type of ensemble - made up of rich samples from disco's back catalogue and an array of drum machine rhythms.
Coming at house music from down under, his productions join the dots between soul, disco and the sample based music that inspired him as a teenager.

The Melbourne based DJ/Producer made the breakthrough to the international scene with ease - and has kept heads spinning with a stream of seriously danceable releases since 2010.