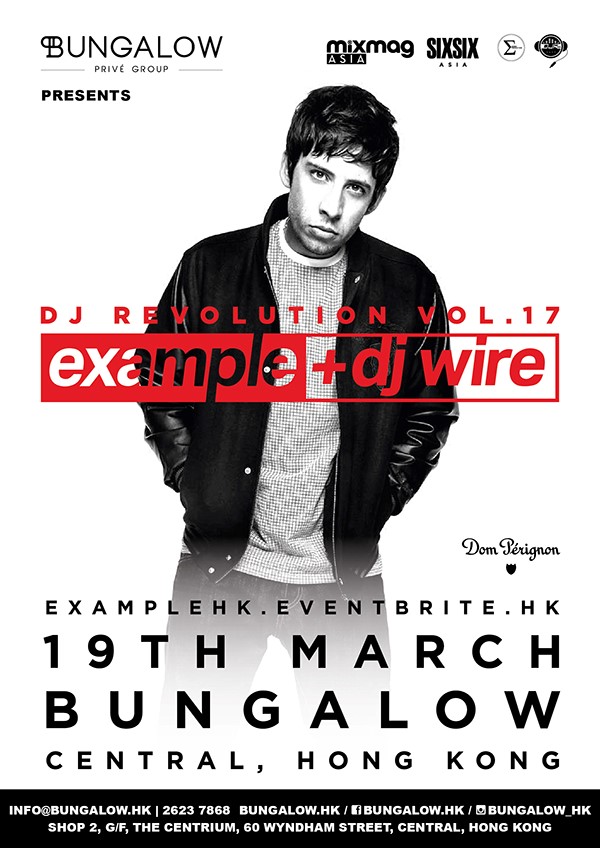 Elliot John Gleave, better known by his stage name Example (arose due to his initials being E.G.), is an English rapper signed to Epic Records and Sony Music.

Elliot Gleave was born in Hammersmith, London and started rapping since young. His first experience of rapping was through a rap battle at a house party when he was 12.

After releasing three singles through his own label "All The Chats", Example received attention from Pete Tong, Zane Lowe and others at Radio 1. Example also caught the attention of people at four record labels. After signing a deal with The Beats, Example put out a response to Lily Allen's No.1 hit "Smile" entitled "Vile" and received Radio 1 airplay from Zane Lowe, Jo Whiley and Chris Moyles.

Example made his first chart appearance in September 2009, when he released "Watch the Sun Come Up" as the lead single from his second album Won't Go Quietly through Data Records.

In 2011, he released "Changed the Way You Kiss Me" where it debuted at number one in the UK and charted in many European countries and Australia. The second song of the album "Stay Awake", which was produced by Nero also debuted at number 1.

Example confirmed he was to have a track he wrote for The Wanted to be featured on their debut US album. The track "Chasing The Sun" was released as a single, featuring remixes from Hardwell and Tantrum Desire and peaking at number 2 in the UK Singles Chart, and receiving worldwide recognition. Gleave also collaborated with Pet Shop Boys on their song "Thursday" from their 2013 studio album Electric.

Prior to his 2014 tour Gleave had confirmed that work on his sixth studio album had begun. Gleave has spent studio time with Netsky and Sigma leading up to his 2014 tour who could be possible collaborators for the album.

For more info and table bookings: