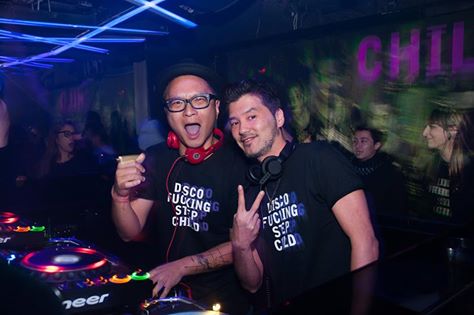 As an avid music lover, Drafus started DJ’ing in the hopes of spreading the music he loved to anyone that would listen. As an obsessive music consumer since ’78,
a regular club kid since ’88, and a DJ since ’98, his wide range of musical influences allow his sets to never be confined with any particular genre. His uncompromising styles have caught on as he plays regularly at Hong Kong’stop venues. He is a third of the trio UPTOWN ROCKERS and a half of the duo DISCO STEP CHILD. Uptown Rockers is accredited with kicking off the whole
electro scene in Hong Kong when the scene was relatively unknown there. They have opened for acclaimed acts such as De La Soul, Phoenix, and are regular acts on the Robot Stage at Clockenflap. He has played at various events throughout the city, including Hysteric Glamour, Louis Vuitton, Diesel, Hogan, Calvin Klein, CK1, Adidas, Nike, DMOP, I.T, Lane Crawford, Shanghai Tang, and Mastermind Tokyo.

Ben Ku is one of the people responsible for shaping Hong Kong’s nightlife and elevating it to become one of the best scenes in the world. He is an entrepreneur with a fond appreciation of music from all over the world. It all started when Ben was charged with getting a math tutor as a child. This math tutor just so happened to DJ on the side and ended up teaching the craft to Ben instead of tutoring him on algebra (don’t tell his parents).

Alongside his wife Jaime Ho Ku, Ben is an original founder of Buzz Concepts, which operates several restaurants, bars, & clubs in Hong Kong. Their crown jewel, VOLAR, is accredited with bringing a proper clubbing scene to Hong Kong and forever changing the nightlife of the city. Ben teamed up with Drafus to create the duo DISCO STEP CHILD in 2009. Their roots lie in many different genres of music, specifically indie tracks, but over the years they have gotten hotter and louder. Currently, DSC’s sound has evolved into more house, bass, and techno genres. He has played for many events and openings, including Louis Vuitton, Calvin Klein, W Hotel, & Lantern in Singapore.