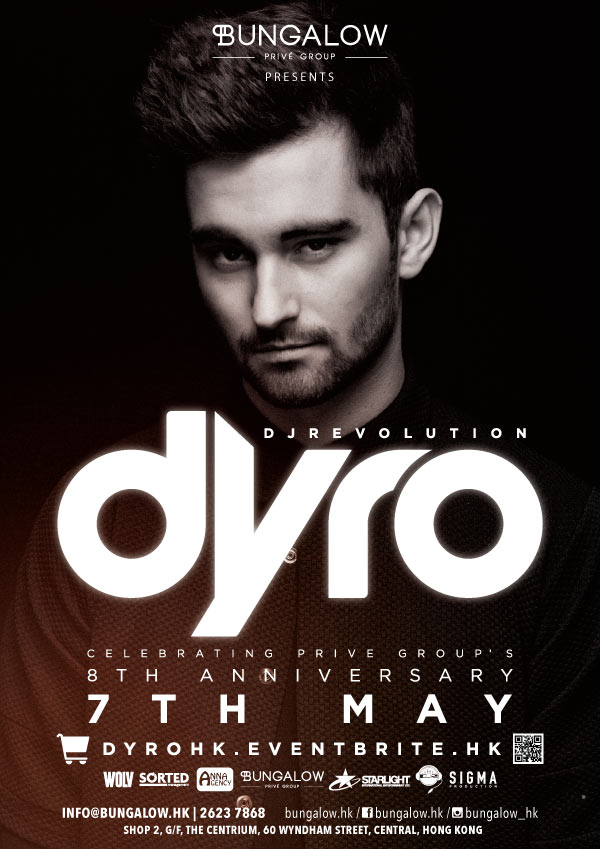 In celebration of Privé Group’s 8th Anniversary Dyro will be joining us for a special performance!

"Dyro is one of the most talented producers I have worked with and has his whole career ahead of him.” World #1 DJ Hardwell.

Known for driving bass lines, enchanting melodies and highly charged drops, Dyro has seamlessly made the transition from bedroom musician to renowned international DJ/Producer. Recently crowned #27 in the DJ Mag Top 100 in 2014, the last twelve months has seen this enigmatic young DJ come of age as he continues to take the world by storm!

Blowing away fans throughout the year, Dyro kicked off 2014 with an epic solo tour to support the release of his track ‘Black Smoke.’ Not one to rest or take a break, Dyro was immediately back crunching the miles as he joined the epic Future Music Festival tour across Australia. It was at Miami’s Ultra Music Festival that, after a rainstorm of biblical proportions, Dannic and Hardwell joined Dyro on stage for an impromptu three-way B2B2B set that captured the raw energy that made the subsequent Revealed Recordings North American Bus Tour, undertaken by these three artists, such a hit with fans.

Having set himself apart with early releases such as ‘Top Of The World’, his collaboration with Bassjackers, ‘Grid,’ ‘Leprechauns & Unicorns’ and the massive ‘Never Say Goodbye,’ co-produced with Hardwell, all of which dominated the Beatport charts and earned him a sizzling reputation as a studio producer. This year’s releases have been equally well received. ‘Calling Out’ exploded into the Beatport Top 10, ‘Sounds Like,’ a high octane dance floor destroyer and his eagerly anticipated co-production with Dannic, ‘Radical’ all became firm fan favourites, catapulting his popularity to the next level.

In 2014 summer saw the launch of his own record label ‘Wolv,’ created as a platform to release his own music and to champion up and coming artists. Its first release ‘Wolv,’ was one of the big festival season anthems that drew a lot of influence form Acid House. With further release scheduled over the coming months, fans can expect big things to come from this fledgling label.