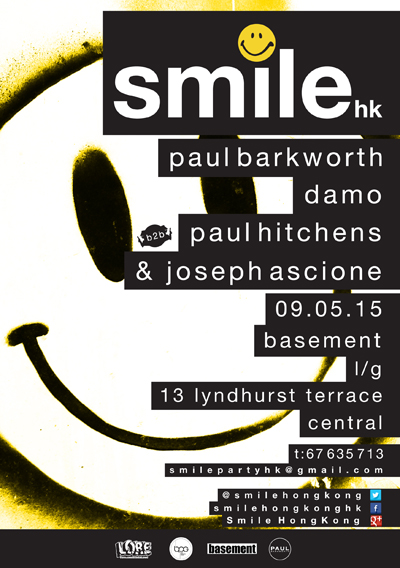 SMILE turns its attention to Hong Kong launching on 9th May 2015 and is based on a character that lives within us all.

Smile is a secret society of party-goers that promotes openness and expressionism and is pansexual in the term that no gender or sexuality is discriminated.

The music which will be based around the past, present and future working its way from Studio 54, Acid House to Chicago, Detroit underground techno and all things House programmed seasonally and featuring music from artists from various times that shapes the way we listen to music today.

An intimate underground venue has featured some of the best local and international artists.

Basement's design is built for your more compact clubbing with a fantastic surround soundsystem that was built and installed around the dynamics of Basement's stylish and modern stripped back architecture with a purpose built outside space to take in the night's air. Basement reminds smile of a mini version London's uber cool underground venue The End (RIP), the late creation of Mr C and Layo Paskin.

Smile introduces its very own resident DJ where old and new generations can connect through his sound that includes brilliant melodies taken from mood and feel of the time that directs emotional engagement through expressionism.

Started his career as a DJ and music enthusiast at the age of 7 years. His parents’ collection of disco and early house set his ears on fire almost before he could walk. Living in London through the mid-nineties fed his appetite for the best of London’s growing progressive house scene.

Then twelve years in Tokyo, running a number of underground nights and mixing with Tokyo’s finest housemasters continued to feed his need for deep and moving beats.  Now a permanent fixture in Hong Kong’s fast growing underground scene, DJ Paul Hitchens is taking his musical mixture to another level.  Using a combination of rare early house, drop dead deep house and techno beats, he wants only to blow you away.  Be ready for something extraordinary.

Supporting the Paul’s and laying down an eclectic repertoire will be Damo (Damien Bell), a former late night venue promoter and evangelist of all things musical. Damien has played  host to numerous private events in the UK and is heavily inspired by multiple genres ranging from 70’s funk, the soulful house hats of the early 2000’s and more modern deeper electronic vibes being pushed out by labels such as Cross Town Rebels and Noir Music.