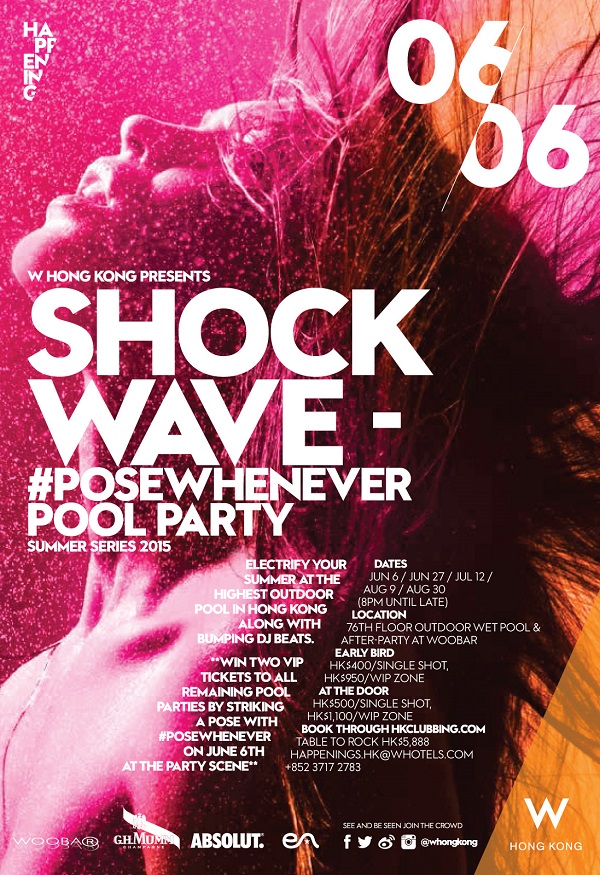 It is going to be a long, hot summer and W Hong Kong is going to make it even hotter with its sizzling summer series pool parties and after-parties – SHOCK WAVE.

The five poolside extravaganzas at W Hong Kong’s iconic rooftop infinity pool WET will feature electrifying DJ beats and exotic mixology from June through August. Other than these, we will be bringing stunning light visuals, exciting flame throwers and energetic dancers to the sky at its highest outdoor pool in Hong Kong – WET.

With an aim to kick up the SHOCK factor of your summer, the opening poolside extravaganza will have the ultra-cool live band – Josep – flying all the way from Barcelona to perform and heat up the night with their powerful vocals and pop tunes.

The revelry will then transition to WOOBAR, the hotspot in town, with “Neon Glow” after parties starting from 11pm till late. Become part of the backdrop with neon face at WOOBAR and dance in the pulsating surroundings of neon lights throwing a UV glow. A fun music spree is guaranteed.

WIP ZONE (VIP) (UNTIL JUNE 6: HK$950 / AT-THE-DOOR: HK$1,100)
- Entry to the pool party & access to the after party.
- Free flow standard drinks and free-flow Mumm Champagne till 12AM and at WOOBAR 1am.
Reservations: http://www.hkclubbing.com/ticketing.html