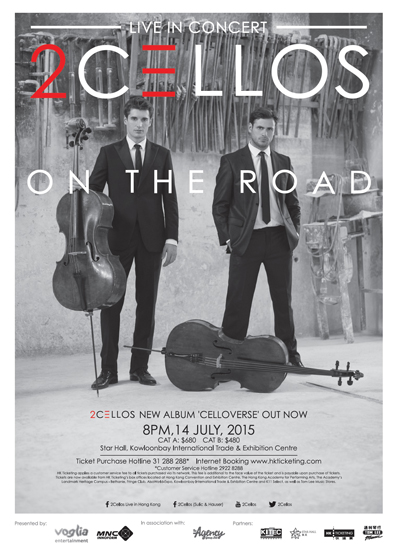 2CELLOS is coming to Hong Kong! The musical duo is set to perform live at Star Hall – KITEC on 14th July, 2015!

Young Croatian cellists Luka Sulic and Stjepan Hauser, together known as 2CELLOS, have achieved international success by taking the cello to a new level with their incredible talent and undeniable passion. Their playing style has broken down the boundaries between different genres of music, from classical and film music to pop and rock. 2CELLOS have no limits when it comes to performing live and are equally as impressive when playing Bach and Vivaldi as they are when rocking out to AC/DC and Iron Maiden.

2015 is shaping up to be an exciting year for 2CELLOS.  On January 27, they released their new album, Celloverse, which debuted at #1 on both the Billboard Classical and Classical Crossover charts as well in the Billboard Top 200.  Their new album is supported by a world tour landing the 2CELLOS in the U.S. in mid-February for 42 sold-out dates. Moreover, 2CELLOS’s viral video for “Thunderstruck” from Celloverse has racked up over 33 million views to date on YouTube!

2CELLOS rose to fame in 2011 when their version of Michael Jackson’s “Smooth Criminal” took the world by storm. The YouTube video became a massive viral hit (over 25 million views!) leading to a record deal with Sony Music Masterworks and an invitation to join Sir Elton John on his worldwide tour. Since then, 2CELLOS has released two commercially successful albums; their self-titled debut (2011) and IN2ITION (2013).

Aside from their huge online following where they continue to amaze with new YouTube hits, 2CELLOS’ main focus is performing live. In addition to many sold out solo tours (U.S., Japan, Europe), the duo have joined Sir Elton John on tour globally, performing with him and opening his shows in massive stadiums and events such as Madison Square Garden, Paris Olympia, Queen’s Diamond Jubilee, and the Emmy Awards. They have also collaborated on stage with the Red Hot Chili Peppers, Queens of the Stone Age, George Michael, and Lang Lang.

2CELLOS have appeared on major TV shows such as the Today Show, The Tonight Show with Jay Leno, The Ellen DeGeneres Show (multiple times), and many others. They were also the first instrumental act to ever perform on the hugely popular TV series GLEE, where they appeared as special guests in the Michael Jackson tribute episode, performing “Smooth Criminal.” Their arrangement of the song, which featured Naya Rivera, debuted at No. 10 on the Billboard Hot 100 Digital Songs Chart and landed the 2CELLOS’ self-titled debut album in the Top 100. Together with superstar pianist Lang Lang, they appeared on CCTV New Year’s Gala to more than 1 billion viewers.

2CELLOS’ success extends far beyond YouTube and their fan base continues to grow around the world through various collaborations. They have teamed up with the rock band Queens of the Stone Age, winning producers T-Bone Burnett and Humberto Gatica as well as the legendary film composer James Newton Howard on a variety of projects.

Sulic and Hauser have played the cello since childhood; Sulic graduated from the acclaimed Royal Academy of Music in London, and Hauser from the Royal Northern College of Music in Manchester, both in 2011. Sulic has won a series of top prizes at numerous prestigious international music competitions including First and Special Prize at the VII Lutoslawski International Cello Competition in Warsaw (2009), First Prize at the European Broadcasting Union “New Talent” Competition (2006) and First Prize at the Royal Academy of Music Patron’s Award in Wigmore Hall (2011) among others. Hauser has worked with acclaimed classical artists such as Mstislav Rostropovich, Bernard Greenhouse, Mennahem Pressler and Ivry Gitlis, to mention a few. He has collected no less than twenty-one first prizes at the national and international music competitions and performed twice for Prince Charles in Buckingham and St. James’s Palace. Both have appeared in major classical music venues throughout the world including Wigmore Hall, Royal Albert Hall, Southbank Center, Amsterdam Concertgebouw, Vienna’s Musikverein and Konzerthaus.

Tickets go on sale from  2nd June, 2015. Get your tickets now through www.hkticketing.com.

Most popular videos by 2CELLOS: