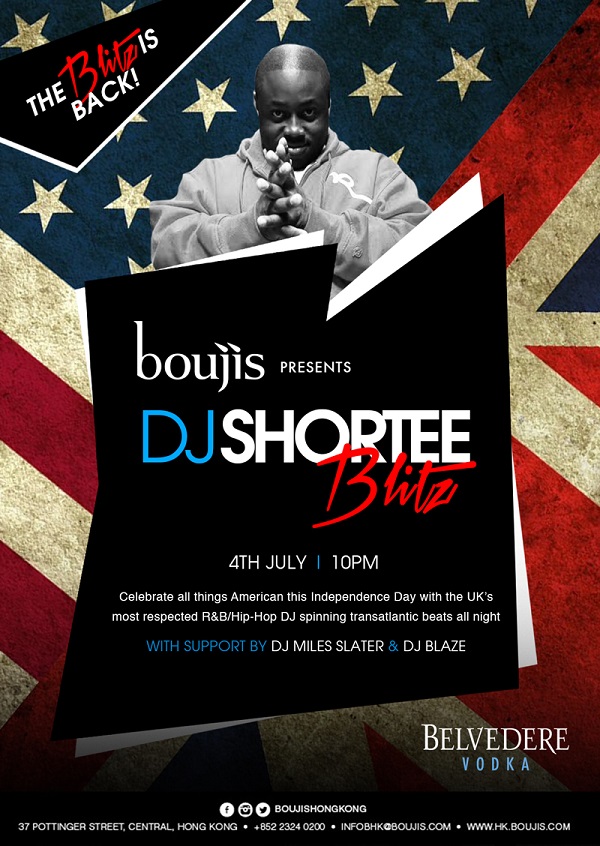 THE BLITZ IS BACK!

We're bringing America and Britain back together for one night only!

Sponsored by Belvedere, this party will be one not to miss, with new summer drinks specials, a transformed venue, surprise performances, and a whole lot of American spirit.

As the biggest 4th of July party in town, stay tuned because we've got a lot up our sleeves!

Shortee Blitz is the UKs #1 hip-hop and club DJ and one of the scene’s most popular personalities. He is a tireless supporter of urban music, and through his numerous performances with artists ranging from De La Soul and LL Cool J to Jay-Z and Nas, he has firmly established himself on the international scene.

Shortee’s signature skills of cutting, scratching and mixing, as well as an ability to consistently rock the dance floor, is recognised by the industry and his global fan base. Having won the Best DJ award at the Mobos in 2003 and subsequently being recognised as the UK’s Best Hip-Hop DJ and Best Hip-Hop Personality, Shortee is no stranger to award nominations or award ceremonies. In 2007 he was nominated for Best Radio DJ (U.M.A.).

His long-running specialist hip-hop radio show on Kiss FM has also been widely acclaimed. He has been holding down a second weekly slot for the last three years, an R&B/Hip Hop/Dancehall Mix show called Kiss Presents…The Mixtape (Saturdays 23.00 – 01.00). Shortee’s association with Kiss FM stretches back over twelve years, where he got his start as a mix DJ for the show he now hosts. All his shows have been nominated for countless awards.