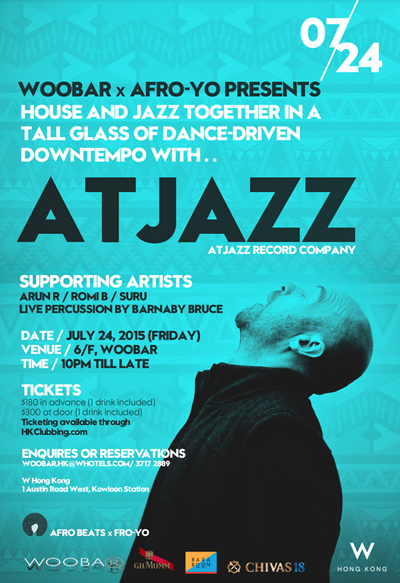 As the summer heat continues to simmer, WOOBAR will be transformed into a tribal-chic paradise for a hedonistic, all-immersive themed party AFRO-YO! on July 24 (Friday), headlined by famed DJ/Producer Atjazz, an artist who takes his global influences seriously.

Martin ‘Atjazz’ Iveson is in demand across the world. Whether it be renowned producer, sought after remixer, or floor filling DJ, Martin gives his heart to hold the soul. Martin has also been a prolific remixer throughout his career remixing and reworking songs & works for artists such as Nitin Sawhney, Bob Sinclar, Jazzanova, Zed Bias & Omar and was even requested to rework Henri Mancini’s ‘The Pink Panther Returns’ for EMI Records. Martin’s trademark sound has been requested on many occasions by top class vocalists including Clara Hill, Replife & Deborah Jordan for their own artist album projects and also rubbing shoulders with some amazing musicians & producers along the way.

In addition to International headliner Atjazz, AFRO-YO! will also feature a musical line-up that includes local DJ talents – Suru “The Saint” Long & Romi Behl, afro-latin percussionist - Barnaby Bruce, and W's Music Curator - Arun R. The event series will continually feature a variety of international and local talent, both musically and visually. Suru made his name across London and now plays regularly at underground events in Hong Kong, London and Bali. Over the past few years, Suru has shared the same bill as Hot Chip, Gorillaz, Wolf and Lamb, to name just a few. Demonstrating his eclectic side, Suru even played a warm up set for Nick Zinner of the Yeah Yeah Yeahs! ROMI B, who with over 16 years experience in the electronic music scene, is absolutely specialized in taking things DEEP. His command of House is simply off the charts, lending him frequent appearances across the city and region, and the title of resident at HK’s only underground club - OMA. Arun Ramanathan, aka Arun R, the W Hong Kong’s new W Music Curator, has been a regular fixture in Hong Kong’s nightlife scene for over 10 years. From the outset he has received critical acclaim and shaken floors through residencies and regular spots at local hotspots such as FINDS, Drop, Gecko and Midnight & Co (formerly Yumla). He has also been the first choice as the opening & closing act for many international artistes such as Mark Farina, ATFC, Sandy Rivera and Mark Knight.

With such an epic line-up, a breathtaking setting is a must-have. Dance the night away in a decadent, glamorous Urban Jungle colored in retro green and yellow lightings. Imagine giant green leaves and dancers swaying their bodies to the bumping tunes in the mist… a visit to WOOBAR that evening makes for an electric entertainment spree.

So dress-down, funk-up, and afro-out – get your tribal-chic on! Think Glam-Safari, wild `animal prints, feathers and furs. Get down to your roots and glamorize! Expect to be taken on a mysterious journey of sights, sounds and sensations.

Terms & Conditions
Admission will only be granted to persons aged 18 and above.
Only tickets issued by Fatsoma will be accepted for entry to the event. Pay Pal receipts will not be accepted and is not considered a ticket for entry.