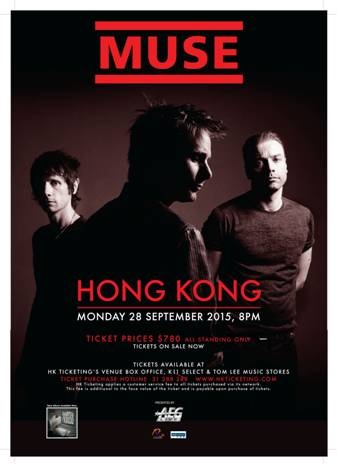 MUSE are set to bring to Hong Kong the Ruse as their opening act on September 28 at AsiaWorld-Expo, Arena.

Muse took the Ruse to Mexico as their support band for 6 shows back in October 2013 and this is the second time in two years.

Priced at HKD 780, only very limited tickets are available at www.hkticketing.com.

Given the band’s live credentials and the fact that their Hong Kong concert will come soon after the release of their hotly anticipated new album Drones, MUSE’s show date is set to be one of the shows of the year in Hong Kong.

HK Ticketing applies a customer service fee to all tickets purchased via its network. This fee is additional to the face value of the ticket and is payable upon purchase of tickets.

About Muse
Muse is Matt Bellamy, Dominic Howard and Chris Wolstenholme. Since forming in 1994, they have released six studio albums selling upwards of 17 million albums worldwide. The group's last album The 2nd Law topped the chart in 21 countries around the world one week after its release. Please visit www.muse.mu for more details.

About The Ruse
The Ruse is a 4 piece indie rock band based in Los Angeles, California. The band was started in 2004 in New York City, but relocated in 2005 to California. The band is known for grand, epic sounding songs and a captivating live show. The band started playing coast to coast tours in 2005, and has since performed hundreds of shows throughout the USA. The band has released 4 full length studio albums, and 1 EP. In June 2009, iTunes selected The Ruse song "Beautiful is Gone" to be the iTunes Single of the Week. The group's album Midnight in the City reached   No. 21 on the Billboard Heatseekers chart as a result. In 2012, The band travelled to France to promote their Rebellion EP. Please www.rusemusic.com for more details.