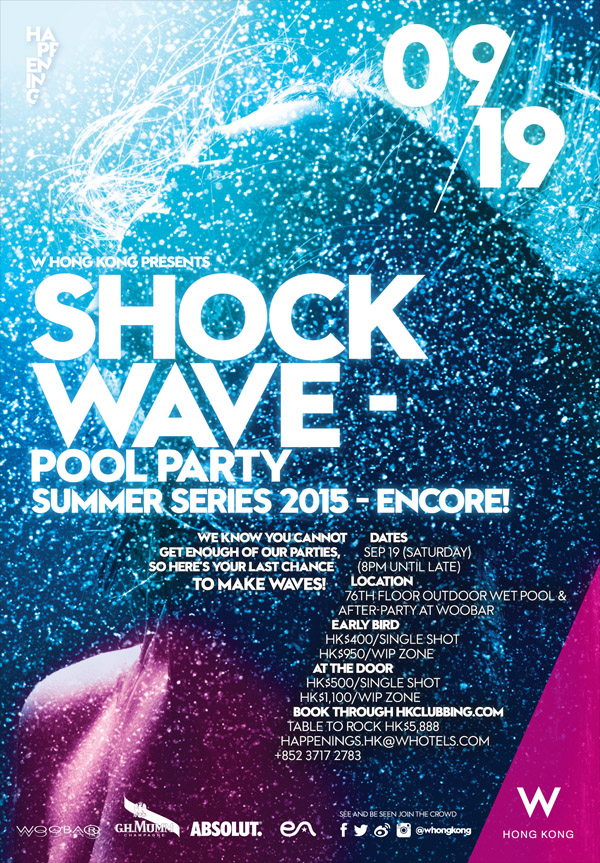 Following the success of the five SHOCK WAVE Summer Series this year, W Hong Kong will be bringing back one more chance to enjoy our infamous summer series pool parties for the last blow-out celebration on September 19!

Sponsored by Mumm, the final luxurious poolside extravaganza on W Hong Kong’s iconic rooftop pool WET Deck will once again take place 76 floors up at Hong Kong’s highest outdoor pool, where movers and shakers dance the night away under the stars, above a stunning panoramic view of the city.

Having seen headline sets from impressive DJs showcasing varying electronic styles,  such as over the series - we've called in Typhoon8 Records' Casey Anderson and W Music Curator Arun R to play the best in deep, funk and disco-infused house and the biggest tunes of the summer. They'll spinning alongside hedonistic performances from flame-throwers, glamorous dancers, and a live LED light show.

Join us then to continue the debauchery down at WOOBAR for a special UV body-painting afterparty where we've got DJ RE:FLEX for the encore -  to spin his upbeat house and electro amongst the pulsating surroundings of neon lights, dancers and instrumental performers. This is the last chance of the summer for an extravagant poolside party so see you there!