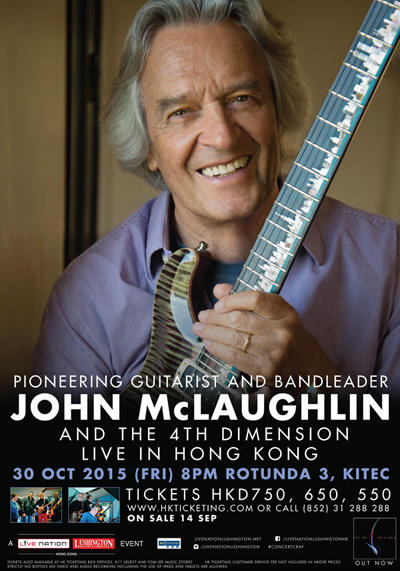 Live Nation Lushington is proud to announce JOHN MCLAUGHLIN & THE 4TH DIMENSION Live in Hong Kong. The legendary guitarist and his band will perform at the Rotunda 3, KITEC on 30 October, Friday. Tickets will be available via HK Ticketing on 14 September 2015 (Monday) 10am onwards, priced at HKD750, 650, and 550.

Veteran guitar grandmaster JOHN MCLAUGHLIN has earned a place in the top echelon of the six-string pantheon. His virtuosity has been on display in a number of divergent settings throughout his celebrated career, beginning in the early 1960s as the electric guitarist for Georgie Fame’s rocking Blue Flames. From there he covered a wide swath of musical territory. In the late ‘60s and early ‘70s, he explored electric guitar jazz-rock fusion with Tony Williams’s Lifetime and Miles Davis’ Bitches Brew, On the Corner and Live at the Cellar Door bands. (It was through McLaughlin’s tenure with Miles that he got to work with Chick Corea.)

McLaughlin’s musical influences carry over to many of the musical elite also declaring him to be “the best guitarist alive,” as Jeff Beck mused in 2010. In 2003, McLaughlin was ranked 49th in Rolling Stone magazine list of the "100 Greatest Guitarists of All Time" and in the summer of 2007, McLaughlin performed at Eric Clapton's Crossroads Guitar Festival in Bridgeview, Illinois.

Chick Corea remarked to DownBeat Magazine that “…what John McLaughlin did with the electric guitar set the world on its ear. No one ever heard an electric guitar played like that before, and it certainly inspired me. John's band, more than my experience with Miles, led me to want to turn the volume up and write music that was more dramatic and made your hair stand on end."

McLaughlin’s new album “Black Light” will be released this fall and the expansive, emotionally charged new album showcases his virtuoso 4th Dimension Band. McLaughlin adds, “I have explored ways in music and recorded them with happiness. ‘Black Light’ has opened a portal that is neither Jazz nor Rock, nor Indian nor Blues, and yet all of these: it’s an open door. ”

Otherwise electric, Black Light features the 4th Dimension – “my three favorite musicians,” in McLaughlin’s word – in full flight, with their empathy and precision honed on stage and in the studio. The 4th Dimension is composed of the remarkable multi-instrumentalist Gary Husband on keyboards and drums, Etienne Mbappe’s nimble, effervescent electric bass, and the powerhouse drumming of Ranjit Barot.

Following the international release of Black Light, McLaughlin and the 4th Dimension will set out on a world tour, continuing to explore and elaborate upon the album’s genre-defying material. They last performed in Hong Kong in 2014 at the Hong Kong Arts Festival. Fans will once again get to experience the musical genius of McLaughlin & the 4th Dimension this October.