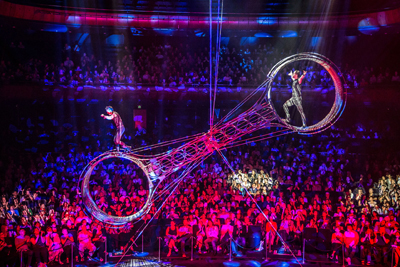 Audiences in Hong Kong are set to experience circus at a whole new level this Christmas, when the heart-stopping show CIRQUE ADRENALINE roars into the Territory.   Direct from a critically-acclaimed sell-out season at Sydney Opera House, CIRQUE ADRENALINE comes to AsiaWorld Expo for two weeks only from 22 December 2015.  Tickets are on sale today for priority booking, with public sales commencing on 29th September 2015.

CIRQUE ADRENALINE is a jaw-clenching show featuring the world’s most dangerous and death-defying circus acts – guaranteed to get the adrenaline pumping.  A new genre of circus, it blends the traditional acts with the new; mixing clowns and trapeze artists with daredevil motorcyclists and complex aerial stunts.

CIRQUE ADRENALINE’s troupe of over 50 performers, including many former stars of Cirque du Soleil, is renowned worldwide for its theatrical flair and breath-taking acrobatic displays both on the ground and high above the stage.  The stuntmen, trapeze artists, aerial performers, fire-breathers, strongmen, jugglers, acrobats and tumblers are at the peak of their prowess, handpicked from the best and most original circus acts in the world.

The 15 acts are choreographed at a brisk back-to-back pace: high-risk stunts are interspersed with clownish escapades and stunning acrobatic skills.  Spectacularly staged, with dramatic lighting and music, this contemporary circus show has the audience gasping and laughing from start to finish.

Having thrilled audiences around the world – from the US, South Africa, the UK, Australia and beyond –CIRQUE ADRENALINE now makes its debut in Hong Kong over the Christmas season.

CIRQUE ADRENALINE is proudly sponsored by THE CLUB, HKT’s loyalty and rewards program.  Speaking about the recent partnership, HKT’s Executive Advisor to Group Managing Director, Eva Lam said “Since launching THE CLUB in December last year, we have been partnering with different premium brands to offer exciting and exclusive activities for our members.  CIRQUE ADRENALINE is a world exclusive that I know our members will love and we are proud that we can offer them a priority booking and discount. Our members can use their Clubpoints or cash to redeem tickets for the Gala Premiere, VIP and other tickets with 10% discount and enjoy money can’t buy experience such as attending a final dress rehearsal for the show.

Chief Executive of Lunchbox Theatrical Productions, James Cundall, added “CIRQUE ADRENALINE is something I know Hong Kong audiences will love – this is high-octane family entertainment that won’t disappoint.  I have always had a passion for circuses and this one blew me away, not only with its incredibly talented performers but in the way the show is presented - it’s fast, funny and will have you on the edge of your seat.  If you think you have seen circus before, think again!”

CIRQUE ADRENALINE is produced by Simon Painter and Tim Lawson and is presented in Hong Kong by Lunchbox Theatrical Productions. The show is proudly sponsored by The Club.


A limited quota of Family Packages (2 adults / 2 children) and Full-Time Student tickets are available for all performances in VIP, A, B, C & D-Reserves.

Tickets priced from HK$295 to HK$895 are available during The Club Priority Booking period from September 14 to September 27:

General Ticket sales commence from Tuesday, 29 September via all HK Ticketing  outlets or by calling the HK Ticketing purchase hotline or website as follows:


ABOUT THE CREATORS
Simon Painter- Executive/ Creative Producer
Simon Painter is a visionary creative producer and entrepreneur based in California. Originally from London, Simon started his career as a classical violinist but soon transitioned into producing and creating commercial theatre. During the last 10 years, Simon has been at the forefront of the live entertainment industry, having launched and managed major performance venues and conceived, created and produced acclaimed productions such as Adrenaline and Le Noir. The first show he produced, Le Grand Cirque smashed box office records at the Sydney Opera House selling over 40,000 tickets in 10 days. In 2012, in collaboration with Tim Lawson, Simon created “The Illusionists” franchise, which became the biggest-selling magic show in the history of Broadway and has played in over 50 cities in 15 countries. The shows’ expansion includes the stunning sequels The Illusionists 2.0- The Next Generation of Magic and The Illusionists 1903- The Golden Age of Magic, which debuted in Australia in January 2015.

Tim Lawson
Tim Lawson is the CEO of TML Enterprises, servicing Australia and international territories with first class musicals and family entertainment with productions spanning across 150 cities in 25 countries including A Chorus Line through Australasia and London, Chitty Chitty Bang Bang and the international theatre and arena tours of Le Noir and The Illusionists, premiering on London's West End this XMas and returning to Broadway where it smashed box office records.


About The Club
The Club is an exciting rewards program designed to ensure loyal HKT customers experience a variety of exclusive services and benefits across HKT’s lines of business. This amounts to a complimentary pass to high-quality living, while enabling HKT to demonstrate appreciation for customer loyalty. Members of The Club can earn Clubpoints for every dollar of eligible spending on HKT services. These can then be redeemed for an amazing list of exciting products and HKT services.

HKT offers Hong Kong’s only quadruple-play experience delivering media content on its fixed-line, broadband Internet access and mobile platforms jointly with its parent company, PCCW Limited.
HKT also provides a range of innovative and smart living services beyond connectivity to make the daily lives of customers more convenient, whether they are at home, in the workplace, or on the go.