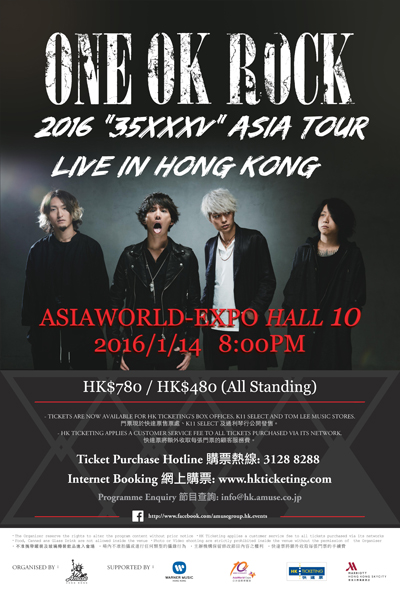 After more than two years, world-renowned Japanese rock band ONE OK ROCK is set to bring their music back to Hong Kong with the ONE OK ROCK 2016 “35xxxv” ASIA TOUR on Thursday, 14th January, 2016, 8PM at AsiaWorld-Expo!

ONE OK ROCK formed in 2005, the band consists of Taka (Vocal), Toru (Guitar), Ryota (Bass) and Tomoya (Drums). They are known for their outstanding works which combine the Japanese and the European rock style in a perfect way. Throughout the years, they had attract countless music lovers not only in Japan but all over the world.

The Band joined Warner Music in July 2015, after that they spreads their music to Europe, UK & USA with their latest album “35xxxv” which have released an international version with English lyrics. Since September 2015, they had toured all over the world including places like: Hollywood, Chicago, Toronto, New York, Moscow, Berlin, Munich, London, Milan, Paris......, and their tour received great applause from worldwide fans.

In 2013, all tickets for their Hong Kong live show were sold out within an incredibly short time. Since then, the band become even more popular, and recently, they become the very first Japanese Band who have ever held 2 consecutive days of concerts at Taipei Arena.

Responding to the continued support from fans, ONE OK ROCK have announced their coming ONE OK ROCK 2016 ”35xxxv” ASIA TOUR will be started in 14th January 2016, and Hong Kong has been chosen as the first station of the tour!

Ticket sales start on 10th November 2015, do not miss your chance to see ONE OK ROCK rocks the stage with their biggest hits!