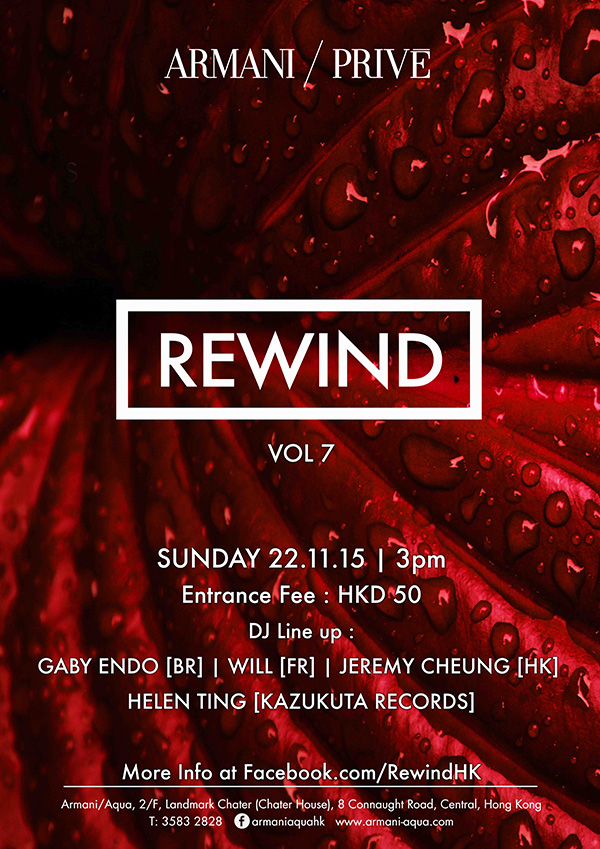 After another unforgettable event in October, the REWIND team is thrilled to present REWIND Vol#7. Once again, it will be located at the beautiful outdoor terrace of Armani/Prive, in Central. A stunning location with a breath taking view of our beloved city.

So SAVE THE DATE, spread the world, and come to enjoy this Lazy Sunday with amazing tunes, beautiful people, and those REWIND vibes...

Doors open at 3PM and judging from our past events the venue will fill up fast so come down early to avoid disappointment.

Entry fee is HKD $50 (CASH PAYMENT on the door; pre-purchase not available)

_________LINE-UP_________
> Will [FR]
New kiddie in town, Paris native that spent 7 years breathing & living New York's notorious underground electronic music scene where he first started spinning at pop-up parties. Has been cultivating his passion and taste for house & electronic beat since his teenage years and looking forward to spread his love for deep/tech house across the music scene of H to the K.

> Gaby Endo [BR]
Born in Brazil and half Japanese, Gaby travelled the world for the past 12 years for her modelling career which has been a great opportunity to absorb and learn from the music culture of different places and to get influenced by what each country brings in terms of music styles, festivals, night clubs and crowd. Gaby has always been a big music lover and deeply involved in the underground music scene. Inspired by the knowledge and references of so many years on the road, and moved by her biggest passion, she finally decided to take a step forward and get behind the decks. Free spirited, her tech-lined sets are full of energy built around melodies, ethnic rhythmics and a lot of love. Gaby is now based in Hong Kong where she is also co-founder of two party labels, LOVE&BEATS and REWIND

> Helen Ting [ KAZUKUTA RECORDS ]
If Music is an expression of the soul, Helen Ting (Kazukuta Records) is an expression of Music. Her siren sounds and sexy persona have consistently hypnotized crowds all across the world. Any musical traveler who comes to Hong Kong will find themselves drawn to Helen's signature blend of Deep, Soulful and Afro house as she performs as the resident DJ for HK's top venues.

Standing at the upper echelon of Hong Kong's musical hierarchy, Helen has found herself broadening her horizons by performing outside of Asia; New York, San Diego, Los Angeles,Atlanta, Boston, Chicago, Miami (Winter Music Conference 2012-2014) and Mi Casa Es Su Casa Music Festival 2012-2014 in Mexico.
In December 2014, she traveled to Africa for her first time to play in Angola with Kazukuta Records’ Djeff Afrozila.
In October 2015, She also play in Amsterdam for ADE festival! In addition, you can often find her behind the decks of international VIP gigs held by global brands such as Cartier, Jimmy Choo, and Audemars Piguet.

This being said, as the darling of the Hong Kong night scene keeps on making her path, it is without a doubt that wherever Helen goes, her fans will follow her musical journey as she has even more to bring artistically in the upcoming years!

> Jeremy [ This Is Music/ Mass/ Oma ]
Champion of the 2008 Pioneer Hong Kong DJ Quest, Jeremy started his DJ career in 2006. In just a short period, Jeremy has already played with some of the world most renowned international DJs and producers such as Darren Emerson, Dubfire, Christian Smith, Four Tet a.k.a. Kieran Hebden, James Lavelle (UNKLE), Adam Freeland, Howie B, Phil K, Jo Mills, Shin Nishimura just to name a few.
Beginning to learn the art of DJ-ing at 16, in his DJ sets one will find a nice blend of different genres ranging from House, Deep house, Tech-House, Techno, Minimal, Indie Dance/NU Disco and more. Having a lifelong love for a wide spectrum of music, Jeremy delivers a rocking DJ set every time with his impressive knowledge of tunes of all sorts.
Jeremy is now resident DJ at Oma which was mentioned as one of the top 5 underground clubs in Southeast Asia.
_________ENTRANCE_________
> HKD $50 (CASH PAYMENT on the door; pre-purchase not available)