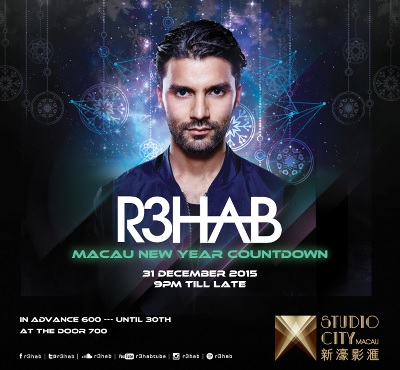 Celebrate New Year's Eve at Macau's newest venue, Pacha Macau! We're bringing in Dutch sensation R3hab for a celebration like no other.

Recognized across the globe including stints at Coachella, R3hab has built a successful career with original material and remixes including over 100 million Soundcloud streams, 26 million Spotify streams and 6 No.1 singles in 2014. He has collaborated with top artists including Calvin Harris, Beyoncé and John Legend.

His latest residency has put him at the LiFE Nightclub and Foxtail Pool Club at SLS Vegas - head to Pacha Macau and start 2016 off right!