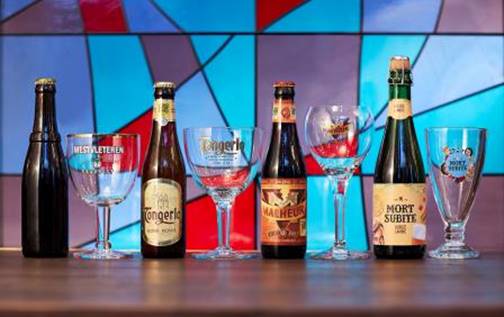 Rare chance for beer connoisseurs to savour legendary Westvleteren 12 – the world’s rarest and most revered beer.

Beer connoisseurs are being invited to ‘The World’s Best & Rarest Beers Dinner’ at the new FRITES Belgian Beer Hall in Causeway Bay on January 28th, 2016.

One of Hong Kong’s premier beer events of the year is twinning classic Belgian cuisine with three ‘World Beer Awards’ winners and the world’s rarest and most revered beer, Westvleteren 12.

Waiters are dressing up as monks to recreate an authentic Abbey brewery atmosphere, with a harpist and guitarist complementing the jovial Belgian beer hall theme.

With seating limited to just 60, booking in advance is highly recommended. Tickets are now on sale at https://www.gormei.com.

Highlight of the night is a privileged tasting of legendary Westvleteren 12, brewed by Trappist monks at the St. Sixtus abbey in Westvleteren. With the smallest output of all Trappist breweries in Belgium, their legendary ale doesn’t even have a label – the only way to tell it apart from others is by checking the cap.

Not available in stores, it is considered the rarest beer in the world because individual sales are strictly limited to one case a month per person, which has to be reserved on a hotly competitive “beer hotline” for collection at the abbey.

The four-course beer feast starts with a classic Belgian charcuterie board of cold-cuts, served with Haacht Brewery Tongerlo Blond, crowned the ‘World’s Best Beer’ over about 700 others in all eight categories of the 2014 World Beer Awards, including the ‘World’s Best Pale Beer’. The jewel in the crown of the Tongerlo abbey beers is famed for its signature intense aroma and flavour, developed from an extended re-fermentation and ageing process.