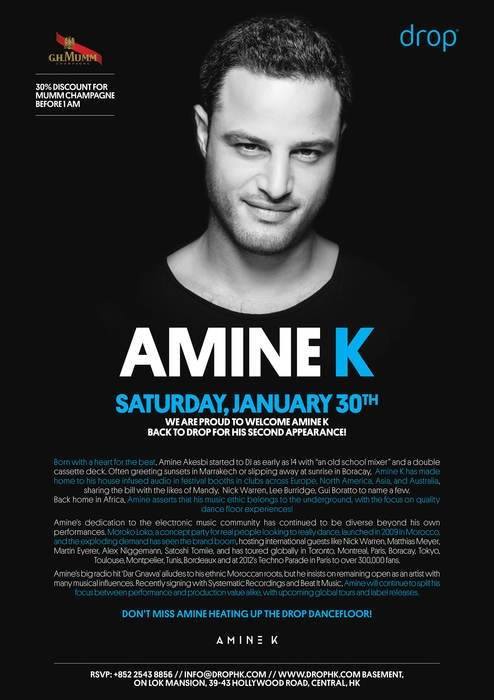 We are proud to welcome Amine K back to drop for his second appearance!
Born with a heart for the beat, Amine Akesbi started to DJ as early as 14 with “an old school mixer” and a double cassette deck. Often greeting sunsets in Marrakech or slipping away at sunrise in Boracay, Amine K has made home to his house infused audio in festival booths in clubs across Europe, North America, Asia, and Australia, sharing the bill with the likes of Mandy, Nick Warren, Lee Burridge, Gui Boratto to name a few. Back home in Africa, Amine asserts that his music ethic belongs to the underground, with the focus on quality dance floor experiences!

Amine’s dedication to the electronic music community has continued to be diverse beyond his own performances. Moroko Loko, a concept party for real people looking to really dance, launched in 2009 in Morocco, and the exploding demand has seen the brand boom, hosting international guests like Nick Warren, Matthias Meyer, Martin Eyerer, Alex Niggemann, Satoshi Tomiie, and has toured globally in Toronto, Montreal, Paris, Boracay, Tokyo, Toulouse, Montpelier, Tunis, Bordeaux and at 2012’s Techno Parade in Paris to over 300,000 fans.

Amine’s big radio hit ‘Dar Gnawa’ alludes to his ethnic Moroccan roots, but he insists on remaining open as an artist with many musical influences. Recently signing with Systematic Recordings and Beat It Music, Amine will continue to split his focus between performance and production value alike, with upcoming global tours and label releases.
Don’t miss Amine heating up the drop dance floor!