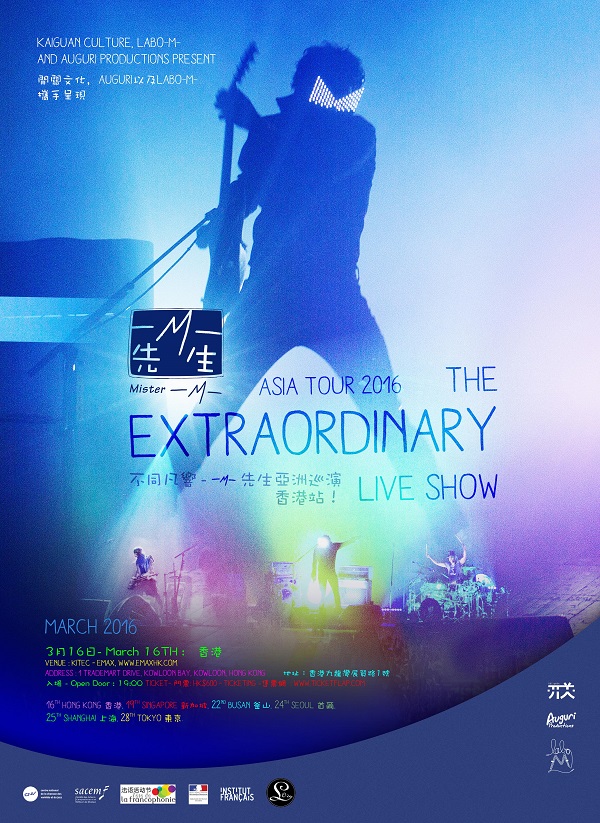 It’s been two years since Matthieu Chedid aka –M-, one of the most versatile and most beloved French talent has last performed in China and crossed path with AM444 (vocalist ChaCha and Dutch producer J.Soul). That encounter led to a beautiful collaboration and the release of dark and sexy single called “Détache-toi”.  Since then, a lot of collaborations have occurred in the –M- galaxy but it is with a great joy that the French artist is announcing a series of « Extraordinary Shows » in Asia from March 16th to 28th with concerts in Hong Kong, China, Republic of Korea, Japan and Singapore! Each performance of –M- is in essence a magic moment that takes us away from our routine and plunges into an immersive experience, but with these special series –M- guarantees to the audience all sorts of surprises, expect something sparkling! Accompanied by his two acolytes Brad Thomas Ackley on bass and Lawrence Clais on drums, Chedid is going to tele transport you into his poetic world. You can expect to hear some exclusive bits of his new album la B.O²-M- , rare pieces from his repertoire rearranged for the occasion, and the highly expected Radio hits; besides –M- will welcome a selection of great featuring guests in each cities of the tour. Expect some-M- with a capital –M-!