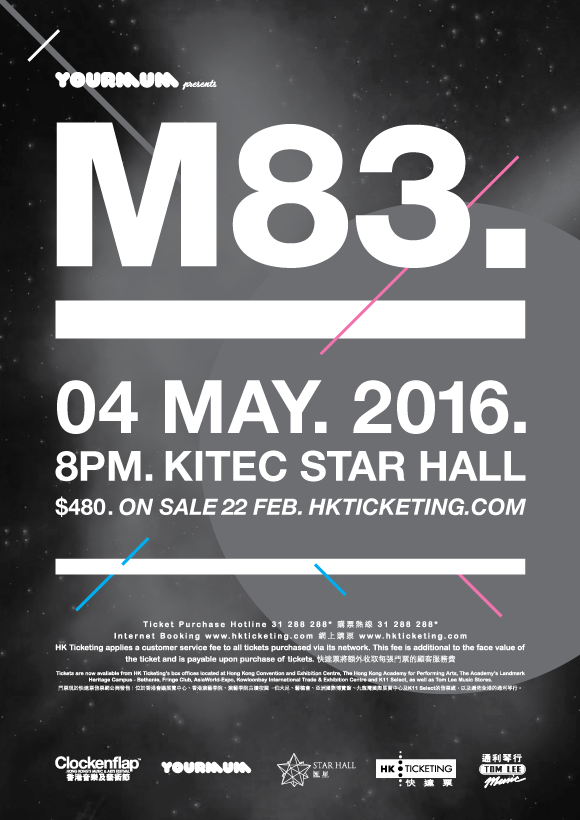 Performing their very first show in the territory, YourMum is bringing space-age, future pop masters M83. in to Hong Kong as part of their 2016 world tour for an evening of epic proportions on May 4th at KITEC’s Star Hall.

The brain child of sonic auteur Anthony Gonzalez, the name comes from an abbreviated version of Messier 83 - a spiral galaxy fifteen million light years away in the Hydra constellation. With six albums released to date, it was 2011’s Hurry Up, We’re Dreaming which placed the Grammy nominated, French native in the direct current of the mainstream. Driven by the global hit single Midnight City the music became pop-culturally ubiquitous, taking on a life of its own as musical accompaniment for numerous TV shows and Hollywood blockbuster trailers. In the following years since, M83. have worked with The Killers and Jean-Michel Jarre, composed the soundtrack to 2013’s Tom Cruise blockbuster Oblivion and in 2015 released the song Holes In The Sky with Haim from The Divergent Series: Insurgent soundtrack.

With the recent news of M83.’s first studio album in half a decade to be released in 2016 (and featuring famed collaborators including Beck and Steve Vai) sending fans into overdrive, there is simply no better timing for local fans to catch the band in Hong Kong as part of the group’s 2016 world tour.