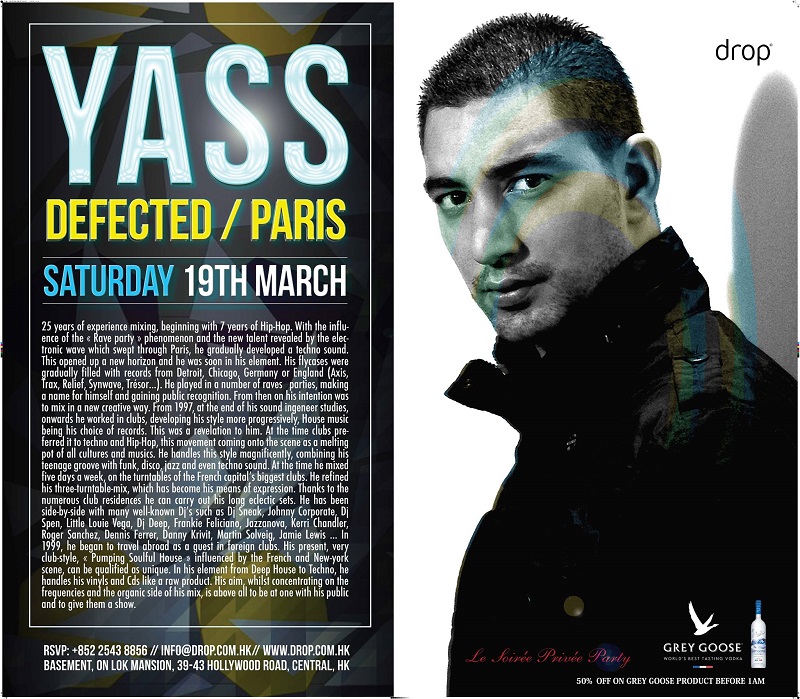 We are excited to welcome DJ Yass back to drop!
Yass is a DJ, producer, Parisian re-mixer, FG radio resident DJ and Defected label artist with prior residencies at L'Enfer and Queen club in Paris.
With 25 years experience in mixing and producing, Yass has reached top international levels, and is counted as one of the most talented artists in the French scene today. His present, pumping soulful house sees him booked every weekend all around the world. He has played recently at Pacha (Ibiza), Ministry of Sound (London), Club Air (Tokyo), Deep L.A / Vanguard club (Hollywood - USA), Southport weekender (UK) and Mad (Switzerland). Yass is a producer and artist on Defected, Loulou and Urbana labels, with numerous successes to his name.
Yass played his first turntables aged 13, and by the age of 19, was one of the youngest resident DJ's in Paris. He began his career focused on Hip Hop, but gradually developed a techno sound, making a name for himself and gaining public recognition. From then on, his intention was to mix in a new creative way.
From 1997 onwards he developed his style more progressively, House music being his choice of records. He handles this style magnificently, combining his teenage groove with funk, disco, jazz and even a techno sound. He refined his three-turntable-mix, which has become his means of expression.
Yass has played alongside many well known DJ's including DJ Sneak, Johnny Corporate, DJ Spen, Little Louie Vega, DJ Deep, Frankie Feliciano, Jazzanova, Kerri Chandler, Roger Sanchez, Dennis Ferrer, Danny Krivit, Martin Solveig and Jamie Lewis.
He has been travelling worldwide since 1999, with guest appearances in top clubs, and drop is proud to have him back once again!