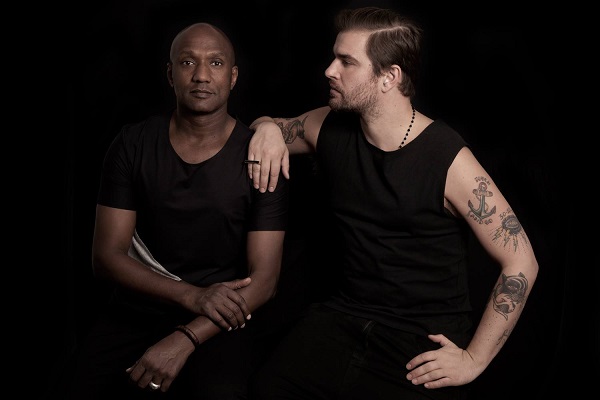 Azimute
A new musical project combining the energies of rising Techno and House Dj-producer Cesare Marchese and veteran DJ-producer Philippe Quenum. In its first few months it has attracted the attention of major players on the electronic music scene, kicking off with releases on Crosstown Rebels, Rebellion, Serialism, Azimute Music and Transmat Records.

Cesare Marchese (aka Cesare vs Disorder, Queen Atom, Strangers in Heaven, Cez) is the freshman in the band, but no newcomer to electronic music. His productions have been released on top labels such as BPitch Control and Get Physical. He was named “Beatport’s Ones to Watch” in 2009 and plays regularly at top clubs and festivals in all continents (Detroit Electronic Music Festival /WMC Miami Winter Conference / ADE Amsterdam/Off Sonar Barcelona) in addition to a residency at Monasterio Club in Moscow. His experience stretches to all aspects of the Techno and House universe; he’s been running his label Serialism from London since 2007 before moving to Berlin in 2010 and promotes label nights at Watergate, Fabric, Rex Club and other top clubs in Europe. Quenum is well-known in the scene and well respected for his longevity and quality contributions. He started his first label Ac- cess58 in London in 1995 and co-founded Cadenza Records with Luciano few years later, composing with him the techno anthem Orange Mistake. His discography stretches over decades and continents, and includes top labels such as Soma, Crosstown Re- bels and NovaMute among many others. Following Quenum’s release of his first album, Face to Face, on Serialism Records, the two artists became close friends.

They quickly realised they share a common musical vision and way-of-life, one centered on friendship and bringing happiness to those around them through music. This is the vision that Azimute wants to share in their performances, a journey, a fresh and joyful experience daring to discover new realms of musical bliss.

Azimute’s first release on Crosstown Rebels came in the form of an EP Entitled Control, it was well received and supported by the industries elite. This was followed by an appearance on John Digweeds Live In Toronto Compilation. The pair have also set up their own LTD edition vinyl only label called Azimute Music, The first release AZMred has been praised by DJs and magazines such as Faze marking it 9 out 10, its also sold out. This summer will saw a follow up release with the Crosstown family on their sister label Rebellion out 20th July 2015, The long awaited We Are The Sound EP on Serialism was in September on vinyl and is now sold out, part 2 will being remixed by Livio & Roby, Konrad Black and Alex Kid. in 2016 their musical output extends to the legendary Derrick May’s, Transmat Records (Jan 2015).
The pair were be based in Ibiza, London and Germany working on their forthcoming album.They toured extensively all over Euro- pe this summer with their last gig being at ADE alongside Derrick May & M.A.N.D.Y for Transmat Gets Physical. In November & December Azimute will embark on their anticipated North and South America tour. In February 2016 they will return to South East Asia for another tour with some surprise live performances along the way.