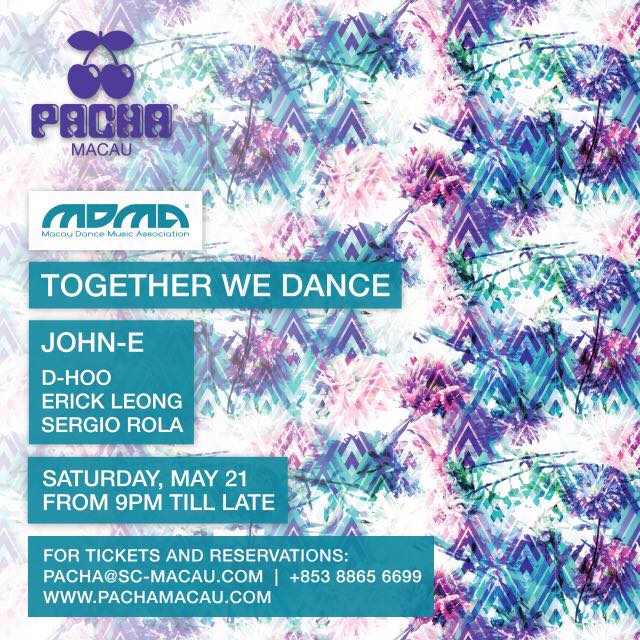 TOGETHER WE DANCE with MDMA

In addition to DJs Erick Leong and D-Hoo, who have previously performed at Pacha Macau on the nights of Together We Dance parties, MDMA is bringing on Saturday, May 21 John-E and Sergio Rola.

For 4 years and counting, MDMA's aim is to establish a firm network of local creatives in attempt to provide a platform for them to perform locally and internationally in prestigious club parties, art and cultural events - they have now held 3 amazing parties at the cherry-branded club that is Pacha Macau.

This time, MDMA is bringing John-E (PT), one of the drivers of the underground movement in Lisbon and a front liner in the birth of the city’s best After-Hours parties who will be at Pacha Macau together with the hypnotic sounds of Sergio Rola, co-promoter and performer for Flipside club nights who has performed at some of Macau's renowned nightclubs.

Shaking the dance floor with MDMA's own Erick Leong and D-Hoo, join us in the debut of John-E and Sergio Rola at Pacha Macau.

Join us on Saturday, May 21 at Pacha Macau.
From 9pm till late