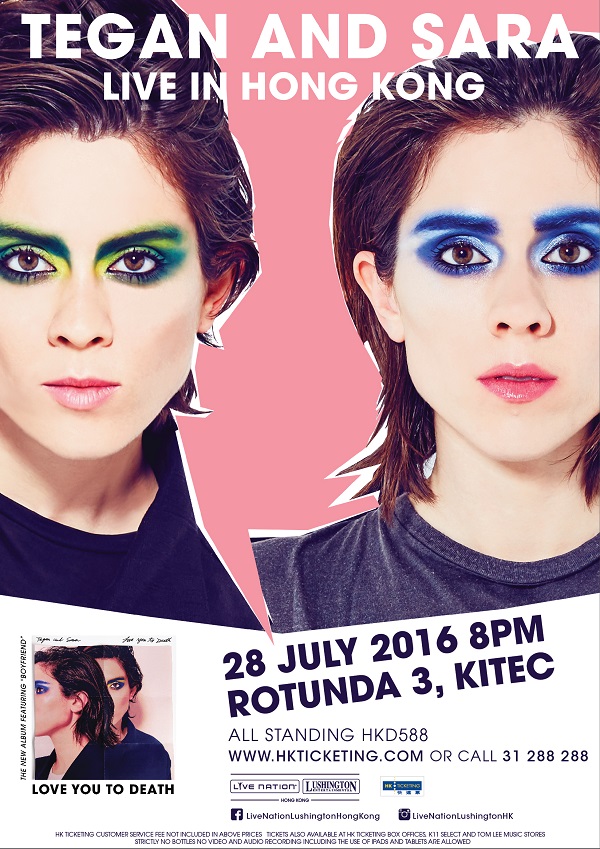 Due to the ecstatic reviews and raving demand for TEGAN AND SARA’s live concert since they last performed in 2013, Live Nation Lushington is announcing the Grammy nominated duo’s return to Hong Kong at Kowloon Bay International Trade & Exhibition Centre, ROTUNDA 3 on 28 July, 2016 for their TEGAN AND SARA LIVE IN HONG KONG.

Twin sisters born in Calgary, Alberta and now residing in Vancouver, BC, TEGAN AND SARA’s career numbers are impressive – over 1 million albums sold, 7 Gold certifications, 1 Double Platinum certification, 3 Juno Awards, 2 Polaris Prize nominations, and a Grammy nomination. But even more impressive is the conviction that has driven TEGAN AND SARA’s relentless evolution as artists. Transitioning from acoustic roots to indie rock royalty in the mid 2000s, with widely-acclaimed albums So Jealous (2004) and The Con (2007), they began the path of reinvention that continues to inform their creative identity today. Propelled by the conviction of reinvention, TEGAN AND SARA’s 8th studio album, Love You To Death, is the latest sonic chapter in a celebrated 17-year career. The album, featuring the first single “Boyfriend,” will be released on Warner Bros. Records on June 3, 2016.

Even as they’ve been embraced by the mainstream, TEGAN AND SARA consciously operate to the left of popular culture – their lyrical and social wisdom comes from an outside vantage looking in. Paradoxically, the essential message that underpins their worldview and identity is inclusion. So it is only fitting that these two self-described outsiders have ultimately found acceptance from such a diverse amalgamation of cultural forces. This is a band that can perform comfortably alongside Katy Perry or Neil Young, Taylor Swift or The Killers. You may have seen them in the dusty desert at Coachella or on the pristine stage at the Academy Awards. Few other contemporary artists can cross boundaries of genre and culture so effortlessly.

Catch TEGAN AND SARA Live in Hong Kong at the KITEC-Rotunda 3 for one night only on 28 July!