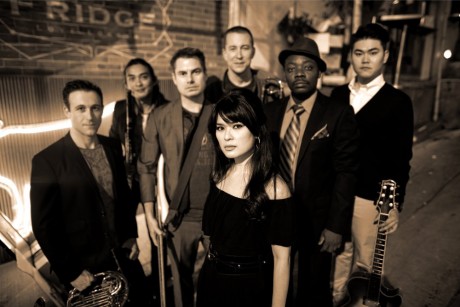 A one-hour set featuring symphonic and cinematic arrangements of original music and covers, including “Hallelujah”, “Book of Love” and new covers of The Police and Me’Shell Ndegeocello.  The SAME set will be performed at both 7:30pm and 9:30pm.

SHAOLIN FEZ launched in 2012 with the release of their album, Calm Your Storm, and made their debut at Clockenflap later that year.  Featuring diva Jennifer Palor and led by HK Philharmonic bassist Samuel Ferrer, this uniquely ambitious project in the Hong Kong live-music scene has become a regular on the festival circuit, most recently designated to launch the Wine & Dine Festival at their special VIP opening ceremony, and re-invited to perform on the Clockenflap main-stage this past December.  Calm Your Storm, with 22 professional musicians and a children’s choir, was mixed by one of Hollywood’s most accomplished engineers (of major films such as “Frozen”), and features the acoustic guitar work of a 2012 Grammy nominee.  SHAOLIN FEZ has also released six music videos.