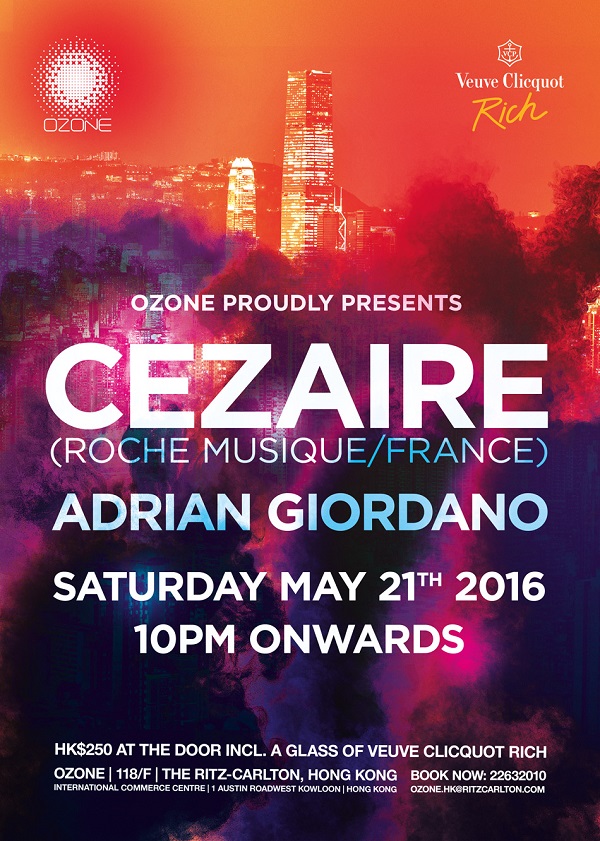 Catch DJ Cezaire at Ozone on May 21st! CEZAIRE is the founder of the trendy French label ROCHE MUSIQUE and an accomplished international artist. He brings his heavy and powerful basses, vocal pitches and G-Funk samples to Ozone for this one and only night in hong Kong. A not to be missed performance!

Child of the G-Funk, raised in rhythmic powerful and groovy of the years 80'et and 90 ', Cézaire is for the electronic music, that was the movement " French Touch " at the dawn of the new millennium, the permanent musical renewal doubled of imperceptible one note of freshness.
CEZAIRE is the founder of the trendy label ROCHE MUSIQUE

Child of the G-Funk, raised in rhythmic powerful and groovy of the years 80'et and 90 ', Cézaire is for the electronic music, that was the movement " French Touch " at the dawn of the new millennium, the permanent musical renewal doubled of imperceptible one note of freshness.

Perpetually in search of inspiration parmis the robust musical culture that he built up itself (and as if it was not enough), the latter, at first musical blogger then creator of events, dashed into the extraordinary adventure of the musical creation, fort of its solid friendships with artists as KARTELL, or FKJ, but also, and especially, because of his love for the electronic music. Because Cézaire, beyond any artistic consideration, is, and will stay as he likes to repeat him, a music lover " under all his forms ".

Influenced by the tones of the New disco, in the confunts of the Funk, the House, but also and especially the Hip-hop, a fan of which he is from the very beginning, Cézaire, AkA Jean Janin, quickly felt the obligation to put on the clothes of manager of label, motivated by the irresistible urge to share the musical creations of the young talented and promising artists with which he surrounded himself, to establish today, one of the most fashionable Parisian labels of moment. Roche Musique is then born course of the year 2012, carried by a multitude of artists in the colored tones the most brilliant of their generation, and door of which Cézaire wants banner.

Artist, Art director, label-manager, talent scout or about is the cap which he carries, his heavy and powerful basses, his vocal pitched and his samples G-Funk does not leave unmoved us. But Cézaire it is also, on the international stage, an accomplished musician, surrounded with renamed artists beside whom he had the privilege to play or to travel the planet (Sebastien Tellier, Kaytranada, (...)) during the uncountable evenings in which he occurred.

Author of tracks parmis the first ones of the catalog of the label and the noticed Ep (" Computer love ", " Kleer-Tonight (Cézaire Rework) "), Jean Janin, who in recently joins the BeYeah agency, celebrate his return in the musical production with the next arrival of his new opus " Seize Heures " to find on Roche Musique.