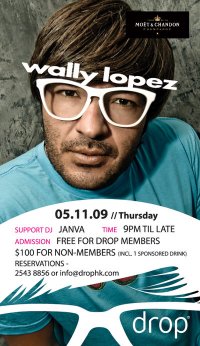 Wally Lopez, a pioneer of the house music in Spain, started as a DJ and radio presenter at the early age of thirteen and in 2000. As producer, he launched the label Weekend Records, remixing artists such as Tiësto, Marco V, Valentino Kanzyani, Dirty Vegas, Bob Sinclar and Robbie Riviera and was launched into the limelight with his first international hit ‘Amman’, followed by ‘Patricia Never Leaves the House’ and ‘Disco Night’, played all over the globe by DJs like Pete Tong, Hernan Cattaneo or Steve Lawler.

In 2001, he created ‘La Factoria Records’ - now TheFactoria, a more underground sub-label called Formula Records and recently a new label called FatXL. TheFactoria produced international hits such as ‘Love Time’, ‘Strike Me Down’ or the more recent tunes ‘Planet Earth’, ‘Burning Inside’ or ‘Close to Me’ and his selected compilations were highly popular, particularly the Weekend CD Series and I’m Coming To… series, with editions in London, Paris, Dubai and Ibiza.

In 2004, the same year he started his residency at Pacha Ibiza, Wally’s remix for David Guetta’s ‘Just A Little More Love’ became a huge world hit winning this Madridian the Ibiza DJ Awards 2004. His other residencies including The End in London, Discotèque and Pacha in Barcelona, Red Light and The Mix in Paris and Ministry of Sound in London all leading to his current prestigious turn at Space Ibiza for the Be@Space parties.