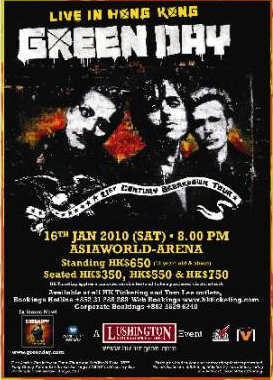 This will be GREEN DAY's first ever shows in South East Asia with performances on 16th January 2010 at the Hong Kong's Asia World Arena for 12,500 fans.


Formed in 1987 and now in the top tier of rock establishment, they have chalked up a remarkable 65 million worldwide album sales.

When they were 17, they first recorded as Green Day, signing with the punk label ‘Lookout’ and releasing the 1989 EP 1,000 Hours with drummer John Kiffmeyer. The next year, the group recorded its first full-length album, 39/Smooth, in a day. Two more EPs followed, with Kiffmeyer leaving to focus on his studies and Tre Cool, with whom Armstrong had played in a band called the Lookouts, taking over on drums for 1992's Kerplunk. With a solid fan base built on the nurturing, all-ages hardcore scene in Berkeley, the group signed with ‘Reprise’ in April 1993

Their major album, Dookie (1994) became a breakout success and eventually sold over 15 million worldwide. As a result, Green Day was widely credited alongside with fellow Californian punk bands The Offspring and Rancid for reviving mainstream interest in and popularizing punk rock in the United States.

Green Day quickly followed Dookie with Insomniac in the fall of 1995 and they hit number one again on the modern rock charts with "J.A.R.," their contribution to the Angus soundtrack. Insomniac performed well initially, entering the U.S. charts at number two and selling over two million copies by the spring of 1996, including the radio favorite "Brain Stew/Jaded", Green Day issued Nimrod in late 1997.

Green Day's albums, Insomniac and Nimrod  reached double platinium while Warning had gold status. In 2004, Green Day's “rock opera” American Idiot reignited the band's popularity and debuted at number 1 on the Billboard charts. In 2005, the band was nominated for 9 Billboard Music Awards and won 6 of them, including "Rock Artist of the Year" and "Rock Song of the Year."

In 2006, Green Day won the Grammy Award for Record of the Year for "Boulevard of Broken Dreams" which spent 16 weeks at the number one position of Billboard's Modern Rock Tracks, a record it shared along with Red Hot Chili Peppers' "Scar Tissue" and Staind's "It's Been Awhile".

Green Day engaged in several other smaller projects in the time following the hype of American Idiot. Green Day released a new album under the band name Foxboro Hot Tubs entitled Stop Drop and Roll!!!
In an interview Armstrong revealed that 2008 would "be a fair estimate of the release date of their new untitled eighth studio album for Green Day." In an interview with Carson Daly, Garbage lead singer Shirley Manson revealed that Butch Vig would be producing Green Day's forthcoming album. The span of nearly five years between American Idiot and 21st Century Breakdown was the longest gap between studio albums in Green Day's career. The band had been working on new material since January 2006. By October 2007, Armstrong had 45 songs written. The writing and recording process, spanning three years and four recording studios, was finally finished in April 2009.
The new album is titled 21st Century Breakdown and was released worldwide on May 15, 2009. It has received rave reviews from the likes of Nirvana's Krist Novoselic. The album had positive reception from critics. After the release, the album hit #1 in fourteen different countries, hitting Gold or Platinum in each. 21st Century Breakdown achieved Green Day's best chart performance to date. The band started playing shows in California in April and early May. It was their first live show in about 3 years and now undertaking an extensive world tour including these South East Asian dates.

Green Day's sound is often compared to first wave punk bands such as the Ramones, The Clash, Sex Pistols, The Jam, and the Buzzcocks. The majority of their song catalog is composed of overdriven guitar, fast, manic drums, and relatively high-treble bass. Most of their songs are fast-paced and under four minutes. Billie Joe Armstrong has mentioned that some of his biggest influences are seminal alternative rock bands Hüsker Dü and The Replacements, and that their influence is particularly noted in the band's chord changes in songs. In fact, Green Day has covered Hüsker Dü's "Don't Want to Know If You Are Lonely" as a b-side for the "Warning" single, and the character "Mr. Whirly" in their song "Misery" is a reference to the Replacements song of the same name. Among other influences, Green Day have also cited Queen, proto-punks The Who, and power pop pioneers Cheap Trick. Armstrong's lyrics commonly describe alienation, ("Jesus of Suburbia", "Boulevard of Broken Dreams", "Road to Acceptance", "Disappearing Boy", "Castaway") hysteria ("Basket Case", "Panic Song", "American Eulogy"), girls ("She", "80" "Only of You","Maria" "She's a Rebel"), growing up ("Longview" and "Welcome to Paradise"), and the effects of doing drugs ("Geek Stink Breath", "Green Day", "Give Me Novacaine"). The Ramones had similar lyrical themes such as hysteria ("Anxiety", "Psycho Therapy"), alienation ("Outsider", "Something To Believe In"), girls ("I Wanna Be Your Boyfriend", "Sheena Is a Punk Rocker"), and drugs ("Now I Wanna Sniff Some Glue", "Chinese Rocks"). Green Day has covered Ramones songs several times, including recording "Outsider" for the tribute album We're a Happy Family, and performing "Blitzkrieg Bop" and "Teenage Lobotomy" when the Ramones were inducted into the Rock and Roll Hall of Fame in 2002.
Green Day have won three Grammy Awards - Best Alternative Album for Dookie, Best Rock Album for American Idiot, and Record of the Year for Boulevard of Broken Dreams.