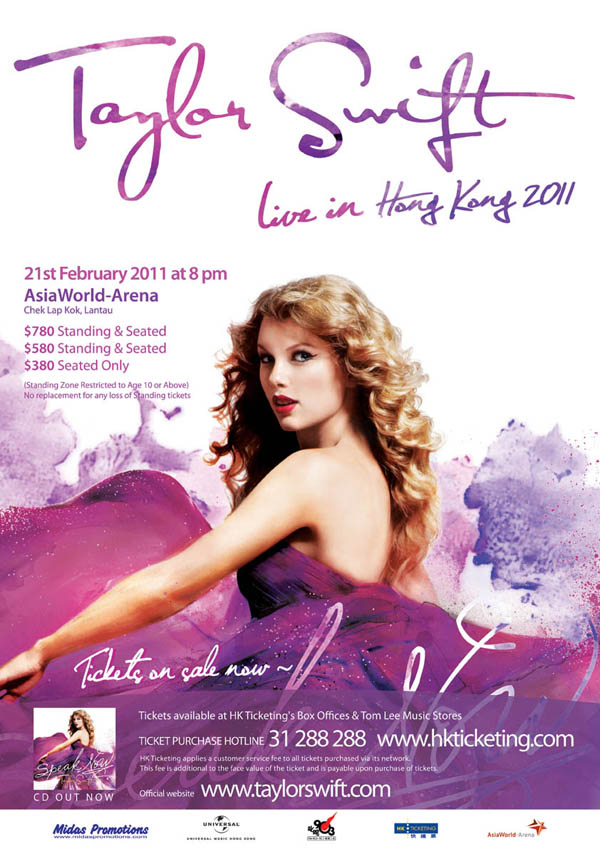 United States sensational country-pop princess Taylor Swift is set to perform for the very first time in Hong Kong on 21 February 2011 at the AsiaWorld Expo Arena.

At the tender age of just 20, Taylor Swift has sold over 13 million albums worldwide in 4 years. In both 2008 and 2009, Swift crowned the title of Best Selling Artist of The Year in the United States. With only two studio records, Swift has been able to capture fans and sweep the charts with singles such as “Our Song”, “Should’ve Said No”, “Love Story”, “You Belong With Me” etc. One must not omit the fact that Swift is one of the most award-winning artists in recent years – she has garnered more than 100 nominations, took home 62 awards. In early this year’s Grammy Award, Fearless was the Album of The Year, Best Country Album; Swift also won Best Female Country Vocal Performance and Best Country Song on the same night. Being the youngest artist in history to receive the award for Album of The Year, Swift’s latest record Speak Now is soon to be released with the new single “Mine” being downloaded for 297,000 times in only 4 days after its official digital release. It also debuted on Billboard Digital Songs Chart at No.1 and Hot 100 Chart at No.3. Swift has broken Mariah Carey’s record set in 1995, and gained the title of the artist with the most Top 5 debuts in the history of the Billboard Hot 100 Chart.

Fans should definitely come to the show and witness Taylor Swift’s stunning live performance. Taylor Swift Live in Hong Kong 2011 is brought to you by Midas Promotions on 21 February 2011, at the AsiaWorld Expo Arena. Tickets are available from 26 October 2010 onwards at HK Ticketing and Tom Lee Music Stores. Online booking is available at ww.hkticketing.com; with purchase hotline 31 288 288.

Taylor Swift Live in Hong Kong 2011
Date: 21 February 2011
Time: 8pm
Venue: AsiaWorld-Arena, Chek Lap Kok, Lantau
Tickets: HKD780 and HKD580 (standing and seated)/ HKD380 (seated)
*Standing tickets are restricted to age 10 or above; all tickets must be presented at venue, no replacement for loss of tickets