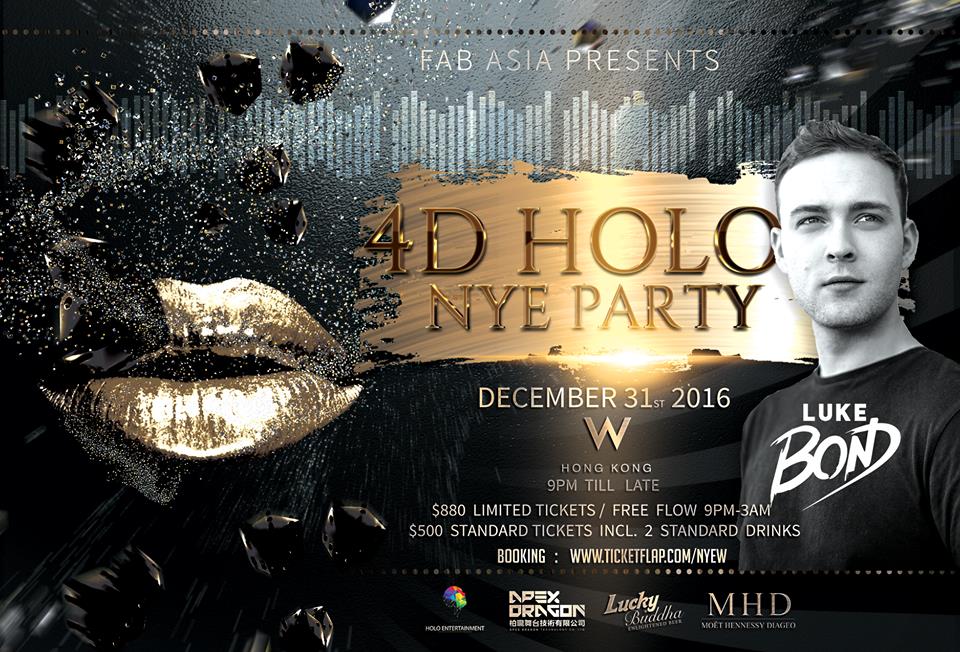 Holo W will be holding the final 4D Hologram show of the year at W Hong Kong on Dec. 31st.To kick off this last night of the year, For $880 there will be free flow from 9pm-3am on alcohol, spirits, and champagne while rocking out to Tech House, Techno, Nu Disco, & House tunes paired with 4D Hologram. Due to limited tickets for free flow, these tickets will be on a first come first serve basis. $500 Standard tickets will include 2 standard drinks.

Flying in all the way from the UK, will be Luke Bond  2 years after being named by DJ Mag as one to watch, Luke Bond released his monster hit 'On Fire' which  earned him an IDMA nomination, a feature in US smash TV show 'Sleepy Hollow' and countless track of the year accolades. His 2016 follow up smash "Once More is leading the charge on Spotify with 1.5 million streams in its first weeks of release.

Luke Bond just smashed through a 20 date North American Tour ( the biggest of his career!), playing at the likes of Marquee Las Vegas, Omnia San Diego, Avalon Hollywood, and making his first US Festival debut at Electric Zoo Festival in New York. Demand for Bond as a live act is as ferocious as demand for him as a remixer. With Cosmic Gate and Gareth Emery both calling on him for remixes of their monster singles; 'Falling Back' and 'Soldier'

2016 has been a huge year for Bond, collaborating with trance giants 'Aly & Fila" earning a Beatport Number 1 spot with 'Million Voices'
From 12pm till late, we are going to be playing Progressive House & Trance to an Epic 4D Hologram show. Join us for this extra special production of Audio and Visual journey.
VVIP & VIP - All Table Reservations: for booking call 852-6622 9912