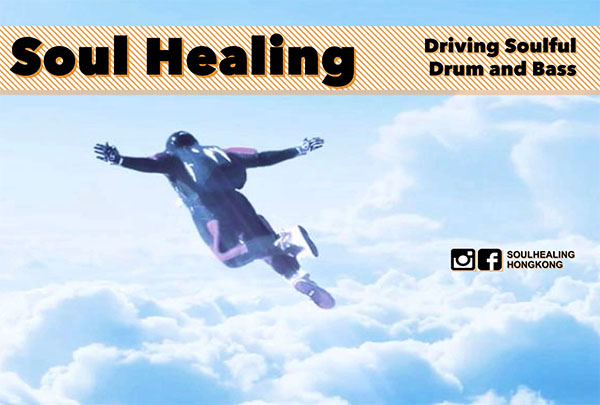 The last Driving Soulful Drum and Bass smasher for 2016 - bringing soul and heavy duty biz to a packed Basement. With the final instalment of Soul Healing for 2016 we’re going all local with a DJ line up including fresh selectas alongside DNB stalwarts. Hosting the eve is the one and only gospel singing legend MOMOKO. After Momoko's absence last SH party due to illness we're keener than ever to have her back dropping gospel vibes from the mic.Plenty of soul but not forgetting to give it to you proper tough just when you need it.

Yoroko Chan aka Momoko has become a soul singing institution in Hong Kong over the years. Having been involved in dozens of local indie, theatre contemp events and her own bands she is a unique and powerful soul/gospel singer that now finds herself appropriately placed inside the walls of Avon Studios - Hong Kong's second largest recording studio in Hong Kong. Her voice is powerful and soulful yet appropriately left of centre giving any crowd the proverbial shivers and goosebumps. In combination with a good Drum and Bass selecta the result is what we refer to as SAF........Sick as F***

Jarr originally springs from the Sydney’s scene in the early 00s as a DJ and Promoter. Under the moniker CAUSE, he threw local DNB parties - Evolve, which along with his weekly DNB radio show on Bondi FM, Deep Beatz, helped foster the early soulful DNB movement in Sydney. Having played alongside numerous international artists including Nu:tone, Breakage, Kode 9 and Tech Itch to name a few, his DJ style spans the full spectrum of DNB from liquid to darkstep as well as the soulful and deeper side of UK influenced Dubstep. Jarr has re-emerged in HK, his home now of 5 years, adding variety to any DJ line up with his own take on underground sounds as well as cutting his cloth as a DNB and Dubstep producer. His first release with respected UK underground label Deep Heads and a forthcoming release on American DNB label Soul  Deep Recordings augers well for Jarr.

Whilst this chap might only be the Founder of Soul Healing, an internationally recognized and booked Psytrance DJ and founder of underground noise venue Strategic Sounds, he is also one of the most respected liquid drum and bass DJs in HK. Then again, his collection of the jungle and the harder sounds can keep any grown basshead in a frenzy until the dogs arrive.

Originally from Hong Kong, RM got his 1st real taste of electronic music during the early 00’s when breaks were abundant in HK's scene. He has bounced around various different styles of electronic music drawing from Breaks, D’n’B to deep/tech house. After gaining huge influences from his time spent in the UK get ready to hear a diverse mix of different drum and bass styles.

Just Bee aka “Go Harder” is our early am silver bullet for the Bassheadz.  Heavily inspired by labels such as Metalheadz, Exit Records, Critical, Soul:r and more, Just Bee loves mixing it up to create filthy concoctions guaranteed to make anyone buzz. Now featuring on the roster of most major festivals in HK, she is a unique pick on a line up as someone who can be relied on to revive any crowd by bringing it in appropriately tough. You want it heavy duty…you got it.