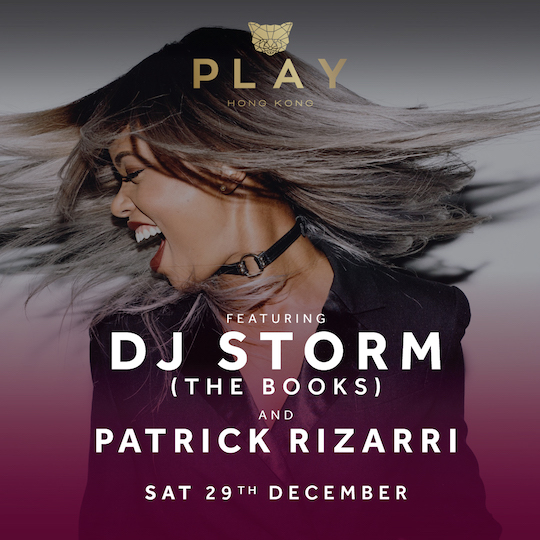 - GO WILD -
Signature Saturdays at PLAY
Take a walk on the wild side at PLAY with our resident DJs: Will Power and Johnnie Rizarri as he guides us through the night from 10pm till late.
Go Wild is our signature Saturday night experiance at PLAY and has been a staple of the Hong Kong nightlife scene, known for great drinks and amazing music.
Welcoming the likes of Ciara, Kelis and a whole host of other celebrities and high profile individuals, PLAY continues to be a social hub for the Hong Kong elite and visiting international stars after an impressive 7 years PLAY is one of the most reputable nightlife venues in the Asia.
Uniquely equipped to entertain and dazzle guests, PLAY takes pride in our incredible personal service and extensive selection of premium Champagnes and spirits.
//
Artist Profile: DJ STORM
Storm Conquers both beauty and bass in her passions as a DJ and Producer.
Storm has opened up for: Kaskade at Staples Center and also performed at the top Los Angeles venues such as Supperclub, Lure, The Colony, Avalon and recently including DJing The Sunset Blvd Shutdown of the "Kendrick Lamar x Reebok Get Pumped" event.
Storm's global appeal has transcended industries with features in Vogue, Glamour, W Magazine and Cosmopolitan. Her music entranced fans worldwide in a setting dominated by bright lights and massive drops - an eclectic mix of cool, under the radar House with an RnB and 80s vibe thrown in, she is music's perfect Storm. Catch this bombshell for the first time in Asia at PLAY,
//
Artist Profile: Patrick Rizarri
As a multiple award winning DJ Patrick has travelled extensively, performing at the most exclusive venues and events around Asia. Having collaborated, toured and opened for members of HEDKANDI, R3HAB and The Black Eyed Peas he certainly has built up a name for himself over the years.
He has been a great advocate in his industry for DJing as an art form and impressively founded the REBEL community under the mantra “I am a rebel DJ, not a jukebox. No requests. No complaints.”, going on to become an international community of DJs and artists.
//
The party starts from 10pm till late.
Table bookings: reservations@playclub.asia
Follow #PLAYHK
www.playclub.asia
www.twitter.com/PLAYCLUBHK
www.instagram.com/PLAYHK
Address: 1/F On Hing Building, No. 1 On Hing Terrace, Central HK