The Damned Live in Hon 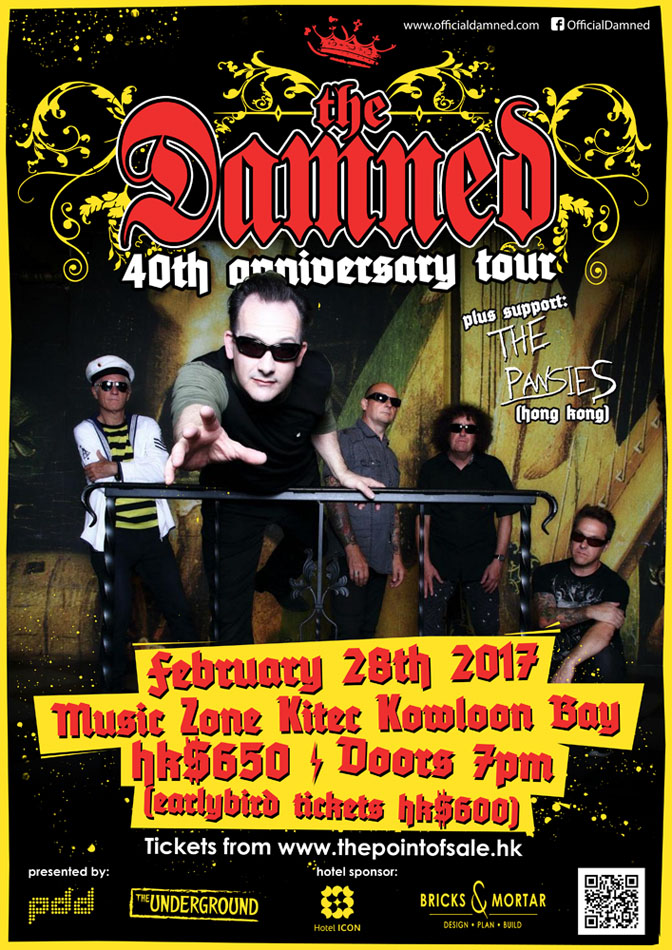 UK’s punk rock legends celebrate their milestone 40th anniversary this year and to celebrate with their overseas disciples, the band will be heading to Hong Kong, to perform on 28th of February to play a special set of their biggest and best songs.

The Damned have always ranked as Number Three among Britain’s original punk bands, after the Sex Pistols and the Clash but as the sole legitimate survivor of the first punk wave they finally get the recognition their fans have always given them.

Prime movers on the London scene in 1976, they released UK punk’s first single, and its first album, before also being the first to split up, albeit fleetingly, in autumn 1977. On the legendary Anarchy tour of December ’76, they fell foul of the Pistols’s manager, Malcolm McLaren. The tour was banned outright across the country, but the Damned wanted to play for their fans, and were ostracized by the others for shying away from confronting the establishment. That set the tone for 4 decades to come……..

Although they shifted to a more goth-rock sound in the ’80s, The Damned have a significant place in punk history, being the first punk act from the United Kingdom to tour the United States, release an album—their 1977 debut, Damned Damned Damned—and release a single. The Damned proceeded to make a run of stone-cold classic albums and singles. There'd be plenty of low points amidst the highs, to be sure, but it's hard to argue with the results

The Damned are soon to be back in the studio recording a new album before embarking on their 40th anniversary tour this spring. The band has had plenty of lineup changes over the past four decades, but lead singer David Vanian and guitarist Captain Sensible remain. The singer and the guitarist will be headed stateside, along with long term members Monty Oxymoron, Andrew “Pinch” Pinching, and Stu West beginning their extensive tour in 2017 with a show at the Music Zone at Kowloon KITEC on February 28th, 2017.

Expect the unexpected and this band will never disappoint you. With the longest stable line up in their history, a new album in 2017, a never ending tour schedule, and with fans worldwide still demanding their attention, the Damned enter 2017 vital and energized and ready for many more years of Anarchy, Chaos and Destruction.