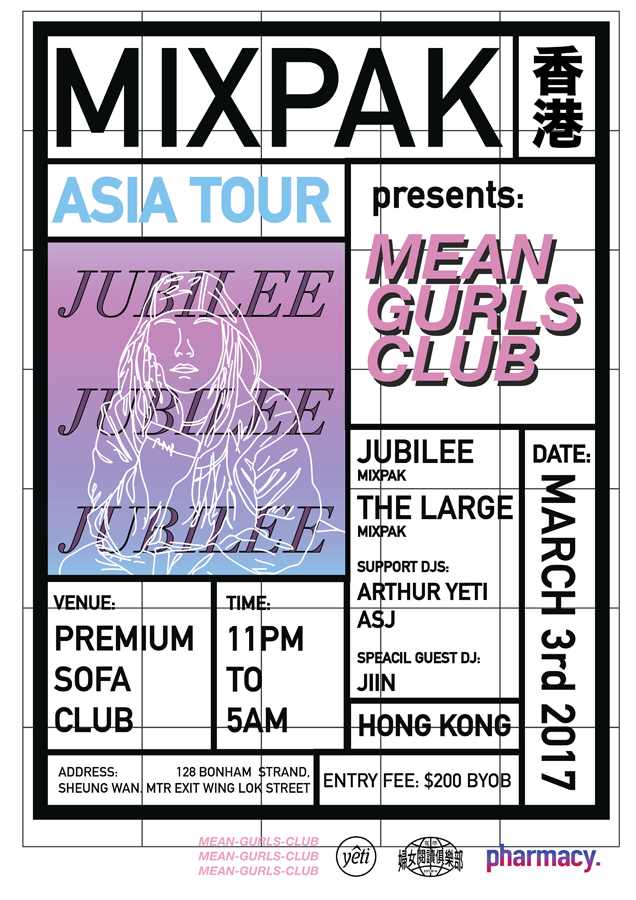 The future is female, i bet you all know that.
We are doing the second "Mean Gurls Club" party on march 3rd . Also we’re cooperate with Ladies book club international x YETI OUT , Do we have to define a party for you? REALLY! OK then...a party is simply a gathering of people ( friends or homies or strangers or stalkers or weirdos ) who come together to have fun, enjoy music and celebrate. Good vibes, good people, no hate, no bigotry, no drama, no bullshit, no guest lists. What adult doesn't like to regress to their younger selves and bounce on the dance floor. Let's Groove.

JUBILEE
Everyone loves Jubilee. How could they not? The girl is full of positive vibes, from her bubbly DJ sets to her smiley demeanor. She’s long been known as “Brooklyn’s bass sweetheart,” but she’s also an ace DJ, one who can capably move between upfront bass music, sweaty tropical jams, party rap, UK grime, house, techno, R&B,dancehall, and more. Stylistically, Jubilee may be hard to pin down, but she’s always been a girl on the move, both literally and figuratively. Growing up in South Florida, she immersed herself in the region’s rave culture, dancing the night away at underground breaks parties while spending her days soaking up Miami bass on the radio. Eventually she made the move to NYC, where she quickly infiltrated the DJ circuit with her sticky grooves and comprehensive knowledge of all things bass. These days, she’s still a regular behind the decks at various clubs,festivals and warehouse parties around the globe, but she also teams up with Mixpak label boss and serious badman Dre Skull to put on a banging party of their own called Mixpak Extended Play. Beyond that, she’s even managed to take her talents to the airwaves, playing guest sets on BBC Radio 1, Shade45, RinseFM and even hosting two radio shows of her own on Brooklyn Radio and Radio Lily. As if she wasn’t busy enough already, Jubilee has somehow found the time to steadily increase her workload as a producer. She released a trilogy of EPs on Mixpak Records, as well as throwing in remixes for Canblaster, Hydraulix, Creep & Zuzuka Poderosa. Much like X-Men character from whom she takes her name, Jubilee has got fireworks up her sleeve. We’re just lucky that she’s elected to use her powers for the good of dance parties everywhere

The Large
British DJ The Large grew up in Bristol, surrounded by the vibes of Massive Attack, Tricky and St Paul’s Carnival. Starting out at as resident at The Heatwave’s legendary “Hot Wuk” party, she ran “one of London’s best dancehall nights” (London Metro) and has since DJed around the world with some of the biggest names in dancehall and underground club music, as well as releasing her long awaited mixtapes. After moving to New York, she now acts as the official spirit guide for Mixpak, where she has worked with Popcaan, Vybz Kartel, Dre Skull, Konshens, Gaika, Palmistry & more, and helped the Mixpak team to Culture Clash victory against Wiz Khalifa & Wiley in 2016. Known for her unique blend of up-to-the-time dancehall with the weirder edge of Caribbean-influenced club music and straight-up UK vibes, her sound is a ride through riddim culture, walking the line between a Passa Passa dance and an east London rave.