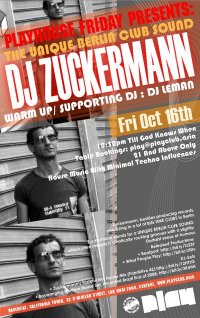 PLAYtime: 10:30pm till God Knows When

Zuckermann is well-know as the founder of the “2nd BERLIN SKOOL” movement, which takes the best from the old Berlin sound (a mélange of early House, Mini- mal, and Techno) and brings it to a fresh and new stage. He is also the co-founder of “Bergmann zu Fuss”, which created the platform for the 2nd Berlin Skool’s LABEL.

Besides records producing, he has also been DJing in numerous BIG TIME CLUBS in Berlin. People would often associate his name with a UNIQUE BERLIN CLUB SOUND - hypnotically rocking music grooves with a hint of Dadaist sense of humor. He has also played internationally in Japan, Europe, and Buda-pest (his 2nd home). His PRODUCTIONS were released in UK, Canadian or German - you can still get a vinyl copy if you ask for one politely.

DJ/ Live-Remixing: Inspired and attempted by the loaded new options to play music with digital DJing, he finally restarted his DJ career in 2008 with a live-remixing setup using some of 2nd Berlin Skool’s best productions plus other things he likes to rock the House with - and a six weeks Brazil tour.